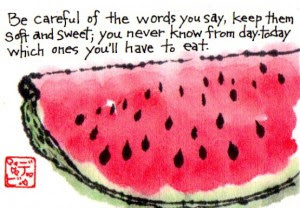 Shortly after I posted my July 6th entry into this Two Worlds blog, I had an occasion to think some more about that "bridge of words" metaphor that was my topic for that day.

I have been struggling for months to get through Consciousness Explained, Daniel Dennett's book, and I am not finding it an easy read. Picking it up once again, on July 6th, to struggle some more, I finally found a discussion I enjoyed. On page 301 of the edition I have been reading, Dennett affirms the efficacy of Dale Carnegie's "power of positive thinking," and then notes how a person, simply by "saying" words to him or herself, will actually cause that person to change internally, to conform his or her feelings and attitudes to the words that have been said. "Be careful," Dennett warns, "what you say to yourself."

Ha Jin, a contemporary Chinese-American poet and novelist, is a lot more fun to read than Dennett. After slaving away with Dennett during the early evening, I decided I'd pop into bed with a book of stories by Ha Jin, Ocean of Words. I recommend his book, and the first story in that book, "A Report," went right along with Dennett's advice.

The story Ha Jin tells (it is only three and a half pages long) is structured as a report from a soldier who is confessing an error to his superior in the Communist Party. As he marched his men, in formation, through the city, he told one of his subordinates to have the soldiers sing a song, "with an eye to impressing the pedestrians." Unfortunately, the song the subordinate chose was a sad one, beginning "Good-bye, mother, good-bye mother..." As they marched and sang, the Company all burst into tears, and gave exactly the wrong impression. "The words and music, suitable only for lamentation, melted the strength in the soldiers' feet. ... Some new soldiers burst out sobbing; even the experienced ones were overwhelmed with tears."

This is exactly as Dennett had predicted! "Be careful what you say to yourself." The words you tell yourself will create the reality they describe.

I had to jump out of bed to see if I was right that Ha Jin and Dennett were describing the same phenomenon. I was convinced they were.

I then also reread a section of Dennett's book called "Words, Pictures, And Thoughts," in which Dennett quotes the philosopher Justin Leiber. After many lines of semi-arcane observations on computer language and natural language, Leiber is quoted as saying this:

Language isn't something we invented but something in which we created and recreated, ourselves.

Maybe I am just projecting my own thoughts, but that seems to say to me that our words (what we say) are the means by which we in fact create ourselves, and through our actions, based on words, all that pertains to our human world. We walk into the realities we make on that "bridge of words" that gets us from here to there.

I am not absolutely certain that this is really what Dennett and Leiber think, but it is what I think. I was cheered to find a glimmer of some common thought in a book I otherwise have been finding too convoluted to enjoy, or even really to understand.

And because I started searching for images to accompany my latest speculations about the relationship of words and reality, I came upon that watermelon at the top of the page, with its very good advice.

Be careful, as Dennett says, what you say to yourself.

And be careful, as that watermelon warns us, what you say to others!