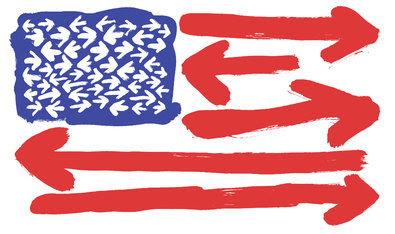 Here I am, doing it again, writing about books I haven't read, based on a review. This is NOT the best practice, but why subscribe to the New York Times Sunday edition if you aren't prepared to rely on what you find there? I HAVE read the review, at least; in this case it's a review by George Packer (a staff writer for The New Yorker, and a reliable source, in my opinion).

In The New York Times Book Review on Sunday, July 5th, Packer writes about two books: By The People: Rebuilding Liberty Without Permission, by Charles Murray, and Wages of Rebellion, a book by Chris Hedges. Here is a link to Packer's review. It was titled "Revolutionary Roads" in the print edition I found on my front walkway on July 5th.

Charles Murray is a scholar associated with the American Enterprise Institute, and Chris Hedges is a well-known left-wing, antiwar writer, famous in my world for his (unfortunately unsuccessful) lawsuit against President Obama, in Hedges v. Obama.

In that lawsuit, Hedges challenged the constitutionality of the so-called, and still-extant, "Authorization for the Use of Military Force (AUMF)." This law purports to permit the United States government to detain people, indefinitely, if the government decides such persons "are part of or substantially support Al Qaeda, the Taliban or associated forces engaged in hostilities against the United States." The government doesn't have to prove this proposition, and the detention is based on the idea that the United States is "at war" against terror. Indefinite detention, without any proof of wrongdoing, is the net result.

Given the background of the two authors, it might naturally be assumed that I would love the Hedges book and dislike the Murray book. Based on Packer's review, however (and I am here echoing Packer), there is a lot to like in what Murray has written, and not necessarily that much to admire in Hedges' book, except the rhetoric. Obviously, anyone interested in the topic of these books should read the books themselves. Or, at least, Packer's review. The topic discussed in both the books, I gather, might be characterized as "whither the American Revolution in today's world?"

Murray objects to the federal "administrative state," and I'm actually pretty sympathetic to his objections. Of course, I am also very sympathetic to Hedges' rhetoric, one bit of which is cited by Packer: "There will have to be a recovery of reverence for the sacred, the bedrock of premodern society, so we can see each other and the earth not as objects to exploit but as living beings to be revered and protected.”

Right on, Charles and Chris!

What intrigued me about Packer's review was actually its opening sentences:

A few years ago, it wasn’t hard to find Americans who thought a revolution was coming. At the depths of the recession, in hard-hit places like the North Carolina tobacco country or the exurbs of Tampa Bay, I met plenty of people who believed we were one power blackout or gas shortage away from civil unrest, political violence, even martial law. The feeling didn’t conform to strictly partisan lines, and the objects of wrath included bêtes noires of both the left and the right: banks, oil companies, federal and state governments, news media. At Zuccotti Park in Lower Manhattan, a Tea Party couple visiting from rural Virginia was surprised to find a patch of common ground with Occupiers — at least until the discussion turned to actual policies. The anger was populist, which is ideologically capacious. The enemy was bigness, feathering its own nest and conspiring against the little guy.

The revolution didn’t come — it never does in America, not since the first one, no matter how bad things get.

That last statement is what got me. The revolution "never comes" in America. So true, even when "everyone" knows we need to make some fundamental and (indeed) revolutionary changes. Everyone, in this case, includes both right-wing Murray and left-wing Hedges. Packer details the agreement of Murray and Hedges on all of the following:


According to Packer (I think he is a reliable source) both Murray and Hedges "are willing, even eager to see Americans break the law, in nonviolent ways, to force change." Here's Murray's quote on that point (though, as Packer says, Hedges would say the same thing):

It is part of our national catechism that government is instituted to protect our unalienable rights, and that when it becomes destructive of those rights, the reason for our allegiance is gone. At that point, revolution is not treason, but the people’s right.

The kind of nonviolent revolution apparently advocated by both Murray and Hedges hasn't happened ... yet. Packer is certainly right about that.

But it is a simple statement of logical truth to know that just because something hasn't happened (yet), that doesn't mean that it can't or won't happen (sometime).

Let's keep that thought in mind! I'm keeping my eyes peeled for one of those "revolutionary roads."