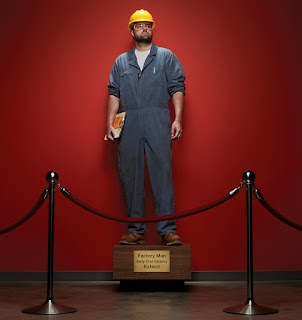 The Atlantic has an article in its July/August 2015 issue titled "A World Without Work." I recommend that article. I also recommend (again) that anyone interested in thinking seriously about our world (and about what we might be able to do to change it, and to make it better reflect our hopes and aspirations) should consider subscribing to the Amor Mundi newsletter, published each Sunday by The Hannah Arendt Center. It's free to subscribe. Just click right here!

The Amor Mundi bulletin I received on Sunday, July 5th, alerted me to the article in The Atlantic. Amor Mundi pointed out that Arendt anticipated what has now become a kind of unspoken crisis:

Sixty years ago Hannah Arendt argued that the advent of automation was one of the two great events threatening the modern age. Against the Marxist hope that machines will free us from the need to labor so that we can pursue hobbies and nurture the soul, Arendt worried that freedom from labor would be soul crushing. We are a jobholding culture in which people find meaning in their employment. Without work, she argued, people will have little to nourish their sense of self. Most people will fall back on consumption, which requires them to labor to earn money to consume more, in a cycle of soul-crushing monotony. Today, many economists and social prophets are coming to see that Arendt had a point. Derek Thompson writes in The Atlantic that the worries that machines will end the need for human labor are finally coming true: "After 300 years of people crying wolf, there are now three broad reasons to take seriously the argument that the beast is at the door: the ongoing triumph of capital over labor, the quiet demise of the working man, and the impressive dexterity of information technology." According to Thompson, "The share of U.S. economic output that's paid out in wages fell steadily in the 1980s, reversed some of its losses in the '90s, and then continued falling after 2000, accelerating during the Great Recession. It now stands at its lowest level since the government started keeping track in the mid-20th century."

I was pleased to see that The Atlantic article identifies a number of clearly achievable ways to address the "end of work" conundrum. That conundrum, which might best be described by saying that our economy depends upon people consuming, and as it becomes possible to produce goods for consumption without actually having to give people jobs to produce the goods, the number of potential consumers, and the capacity of consumers to consume, threatens to undermine the whole circular process of production and consumption:

As Martin Ford (no relation) writes in his new book, The Rise of the Robots, this story might be apocryphal, but its message is instructive. We’re pretty good at noticing the immediate effects of technology’s substituting for workers, such as fewer people on the factory floor. What’s harder is anticipating the second-order effects of this transformation, such as what happens to the consumer economy when you take away the consumers.

Read that article in The Atlantic, to see what you think about the various solutions posited by the author, Derek Thompson, most of which require the application to our modern marketplaces of what he identifies as "the visible hand."

Think about this, too: an economy that depends on ever greater consumption will ultimately destroy the integrity of the Natural World upon which our human civilization is inevitably based.

Consuming less needs to be factored into the equation!