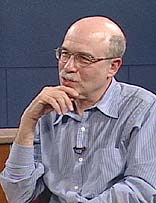 Pictured is Tom Engelhardt. Among other things, Engelhardt publishes the TomDispatch, available free to your email inbox. I subscribe. I encourage you to subscribe, too.

Here's an excerpt from TomDispatch on "What Happened to War?":

The drone, one of those precision weapons, is a striking example. Despite its penchant for producing “collateral damage,” it is not a World War II-style weapon of indiscriminate slaughter. It has, in fact, been used relatively effectively to play whack-a-mole with the leadership of terrorist groups, killing off one leader or lieutenant after another. And yet all of the movements it has been directed against have only proliferated, gaining strength (and brutality) in these same years. It has, in other words, proven an effective weapon of bloodlust and revenge, but not of policy. If war is, in fact, politics by other means (as Carl von Clausewitz claimed), revenge is not. No one should then be surprised that the drone has produced not an effective war on terror, but a war that seems to promote terror.

If you read what I write in this Two Worlds blog, you will know that I have made this point myself (more than once).

Can't help it. Here I am, droning on again.

The President is doing this in my name. And yours!