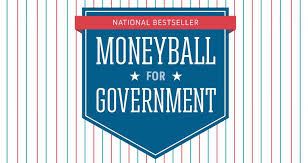 Markets For Good is espousing "moneyball for government." According to Peggy Noonan, we had all better start thinking about that "moneyball" concept, since it is one of the three paths available to America in the years ahead.

In her column printed in the June 6-7, 2015 edition of The Wall Street Journal, Noonan says that the nation will have to pick a path, and that the upcoming presidential elections will need to address the choice.

Noonan is commenting on an analytical framework set out by Ian Bremmer, a foreign-affairs columnist at Time, who sees the alternatives this way in his book Superpower: Three Choices for America's Role in the World:


Read Noonan's column for a short summary of these alternatives. Or, obviously, you can read the book itself.

Noonan seems surprised that Bremmer's preference is for the "Independent America" option, which she synopsizes this way:

We can’t be the world’s policeman; we’re not Superman. We must “declare independence from the need to solve other people’s problems and . . . finally realize our country’s enormous untapped potential by focusing our attentions at home.” We spend too much on the military, which not only adds to our debt but guarantees our weapons will be used: “Policymakers will find uses for them to justify their expense,” which will “implicate us in crises that are none of our business.”


In this view, our national-security bureaucracy threatens our own freedoms and strains relations with allies. The hidden costs of war include individual anguish, cultural stress and a demand for secrecy that “poisons American democracy.” Drones seem neat and effective, but their use is dangerous: “Our actions in the Middle East and South Asia make us more vulnerable at home, by persuading a new generation of Pakistanis, Yemenis, and others that it’s better to attack Americans who aren’t wearing state-of-the-art body armor.” Not every country wants democracy. “For all the damage a foolish foreign policy inflicts on US interests abroad, the greatest damage is done in the United States.” It follows that we must reorient our thinking: “It is not power that makes America exceptional. It is freedom.”


Is “Independent America” a pleasant term for isolationism? That charge, Mr. Bremmer argues, “is not meant to shed light but to close conversation”—to dismiss “every legitimate reservation that ordinary Americans have” about U.S. foreign-policy excesses and miscalculations. The best way to promote our values around the world is by “perfecting democracy at home.” Among the priorities: protect the U.S. from a terrorist attack “that might push America permanently off course,” protect our borders and infrastructure, clean up and invest in public education, put more money back in taxpayers’ pockets. Stronger at home will mean stronger in the world, which will note our renewal.

Actually, Peggy, that doesn't sound so bad to me!