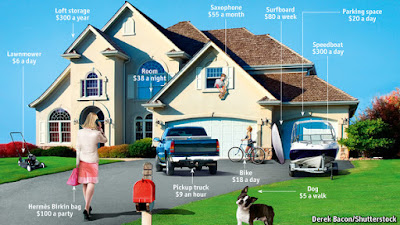 Back on May 26, 2015, The Wall Street Journal ran a column by their technology columnist, Christopher Mims, under the title, "How Everyone Misjudges the 'Sharing Economy.'"

The column is worth reading, and you can click the link, above, to go right to it. Mims' basic point about the "sharing economy" is that "there is no such thing."

Mims observes that the companies that are most prominent in the so-called "sharing economy," Uber and Lyft, "are remarkably efficient machines for producing near minimum-wage jobs. Uber isn’t the Uber for rides—it’s the Uber for low-wage jobs." This pretty much echoes my own criticism of what is sometimes called the "Naked Economy."

I actually think that a truly "sharing economy" would quite possibly be a really good thing. But that would mean that we would analyze the economy not from the perspective of every individual, and what he or she might have to "share" to produce some kind of individual revenue, but that we would see our economy on a cooperative and collective basis, as a project in which we are all involved, and from which we all must benefit.

In the past, this kind of approach was sometimes called "socialism."

I agree with Mims. The basic point about the so-called "sharing economy," at least right now, is that "there is no such thing." There isn't because we, collectively, are unwilling to "share." We are all just trying to get ahead on an individual basis.

What about giving a real "sharing" economy a try?