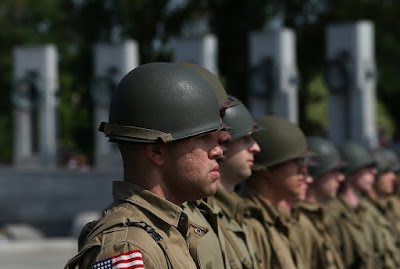 I was a draft resister, and I have never thought that our National Holiday, the Fourth of July, which happens to be my favorite holiday, should be identified with the many past and present military adventures upon which our nation has embarked. My personal feelings about this matter, however, are definitely not determinative. Public officials, like our President, tend to make references to the military on the Fourth of July. There is a lot of "military" type celebration on the Fourth.

Recently, in a column commemorating the 70th anniversary of VE day, Washington Post columnist Robert Samuelson discussed "Why we love World War II." Here's why we do, as Samuelson sees it:

The triumph in World War II was a collective, democratic and unifying event, the likes of which we never experienced before (the Civil War in some respects rivaled the effect, but of course, it was also hugely divisive). It involved almost everyone. As soldiers, sailors and airmen, rich and the poor were tossed in together; so were North and South, urban and rural.

The triumph was not the property of any group, region or class; the victory was national. It belonged to everyone. One of the war’s great emotional appeals, I think, is this emphasis on communal responsibility, obligation and reward. (Unsurprisingly, there are many exceptions to this, the most conspicuous being the continued segregation, even in fighting units, of African Americans.)

It’s why we love World War II. It reminds us who we can be when we are at our best. There is much focus now on inequality, but the inequality is economic, measured in dollars and cents. World War II did not eliminate differences of income and wealth, but it did emphasize equality of duty and contribution. Patriotic commitment was not a function of bank accounts.

Our Revolution, too, was a "collective, democratic, and unifying event." It did, admittedly, also involve a war, but we celebrate the Revolution not really to recall a military victory, but to honor our collective, national commitment to independence and democratic self-government.

In what I thought was a compelling interview, Bill Moyers talked in 2012 to social psychologist Jonathan Haidt about our "contentious culture," the kind of culture that is making our politics dysfunctional. The focus in this interview was Haidt's then-new book, which became a best-seller: The Righteous Mind: Why Good People are Divided By Politics And Religion.

What about some other kinds of unifying projects?

Well, that could even be revolutionary!