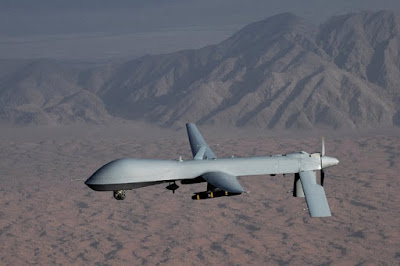 I get periodic mailings from Resilience to my email inbox. These mailings are free. Anyone can sign up.

The last article I received from Resilience was titled, "The Delusion of Control." It begins with a reflection on the Pope's Encyclical Letter, Laudato Si', and moves on from there. It is a long article. It covers a number of topics. I recommend it.

In view of what I was writing about yesterday, however, I couldn't resist highlighting the following excerpt:

Some wag in the media pointed out a while back that the US went to war against an enemy 5,000 strong, we’ve killed 10,000 of them, and now there are only 20,000 left. That’s a good summary of the situation; the US drone campaign has been a total failure by every objective measure, having worked out consistently to the benefit of the Muslim extremist groups against which it’s aimed, and yet nobody in official Washington seems capable of noticing this fact.

I am patting myself on the back. I noticed! I hope you have noticed, too!