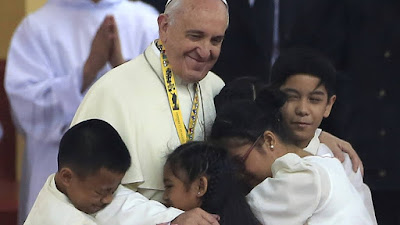 Leave it to the MarketWatch website to tell it like it is! Could that be right? I am not a frequent reader of, or actually familiar at all with, the MarketWatch website, but a brief perusal indicates to me that the website is a pretty unexceptional, business-oriented source of information for those who like to follow investment and finance news (most likely because they are hoping to parlay whatever money they've got into something a whole lot more).

MarketWatch columnist Paul B. Farrell, whose publications include a book entitled The Millionaire Code, wrote an article on Laudato Si', Pope Francis' Encyclical Letter "On Care For Our Common Home." Farrell's column, as published on MarketWatch, advises readers:

Now, the statements quoted above are clearly Farrell telling his MarketWatch readers what the Pope contends. That can be seen as just honest reporting, but could it be that Farrell and MoneyWatch agree with what the Pope is saying?

Pope Francis’s 2015 war cry is to lead a global anticapitalist revolution, a revolution leading billions to take back their planet from a fossil-fuel industry that’s lost its moral compass to the “golden calf” and is destroying its own civilization on Planet Earth.

Let's hear it for MarketWatch and Paul B. Farrell!