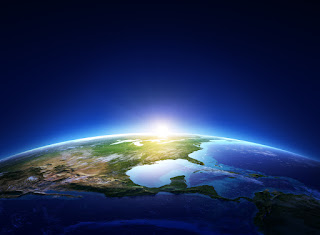 I have previously indicated my profound skepticism about what is being called "ecomodernism." Click that link for a reference to An Ecomodernist Manifesto, and a refresher on my personal views.

Michael Shellenberger and Ted Nordhaus are ecomodernism boosters; at least, that is the way I read their recent posting on The Energy Collective website. That website, by the way, proclaims that it is the place to get thoughts from "the world's best thinkers on energy & climate." I assume that Shellenberger and Nordhaus must qualify, in the opinion of The Energy Collective. I am a bit more restrained in my enthusiasm.

The focus of the Shellenberger and Nordhaus article is the "anthropocene," and they come down for the "good" anthropocene, citing to an academic paper on "Planetary Opportunities." They also mention, with what I take to be approval, the arguments of Mark Sagoff:

If ecomodernism is to have a science and an economics it must also have a spirituality, argues environmental philosopher Mark Sagoff in “A Theology for Ecomodernism.” Sagoff argues that ecomodernists should reject the monotheistic view of nature that environmentalists borrow from Judeo-Christianity. Pre-Christian religions viewed nature as local and assigned gods and spirits to trees, the wind, the harvest, and the sun, Sagoff notes. But “when God became One, nature became one …. That nature expresses one God and is therefore unitary, singular, and at odds with man, who consumes and corrupts it, became a familiar trope of conservationism.” Sagoff concludes, “The theological hope of ecomodernism is that we can understand nature to be many, many places, each with its own guardian spirit. The hope is that human beings will become the guardian spirits of the natural world.”

Here is where I wonder if "hope" is getting a bit beyond its depth. I see no evidence that human beings will become "the guardian spirits of the natural world." Not when building their own world is seen as their primary project.

World "primacy" is what is at issue here. Is the Natural World primary, with our human task defined as "guarding it," or is what we do, in our human-created world, primary, in which case the World of Nature is merely the raw material on which we operate?

So far, human history has made clear that human beings define "planetary opportunities" as our opportunity to plunder the planet to build a human civilization.

That's not going to work, in the long run, and other than "hope" that we might reverse our thinking, and start acting as the "guardian spirits" of the natural world, I don't see "ecomodernism" as providing a new paradigm. As Shellenberger and Nordhaus say, "the ecomodernist manifesto affirms the traditional environmentalist view that human societies should shrink their impact to leave more of earth for nature, but rejects the idea that humans should attempt to harmonize with natural processes."

The way I read this, it's a matter of "primacy," and what the quotation above really says is that human activity is "primary" for the ecomodernists, since they don't admit that humans should "attempt to harmonize with natural processes."

Despite what the ecomodernists would have us believe, I think it's pretty clear that the opposite of what they say is the real truth. The World of Nature is "primary." That's the world upon which we, and all living things, ultimately depend.

Some say it as follows (and quite accurately in my opinion): "Nature bats last." If we don't change our way of thinking, we're going to be "out at home plate."