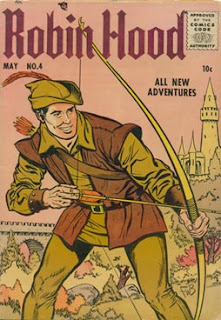 I really liked Robin Hood Was Right. There is a book by that title (not pictured above), first published in the year 2000. The general point of the book is that traditional charity can have the effect of maintaining the status quo, and can actually aggravate the dynamics of dependency and control. That would not be good!

Robin Hood Was Right advocates a "progressive" ethic of giving, with the idea being that nonprofit work should be focused on addressing the root causes of societal problems. Getting more political power into the hands of those persons less advantaged (now officially recognized as the 99%) is certainly one good way to work towards that goal.

Then there is the "Robin Hood Tax." Same idea! I heard about that proposal a couple of years ago, and that seemed pretty attractive, too. Taking from the rich and giving to the poor, the basic philosophy of Robin Hood, is practically the definition of "progressive" taxation. I am in favor of it!

Well, I lost track of the Robin Hood Tax as exemplified in H.R. 1579, the "Inclusive Prosperity Act of 2013, introduced into the House of Representatives by Congress Member Keith Ellison, a Democrat from Minnesota.

Then, just a few days ago, I became aware that the "Robin Hood Tax" was still alive. Senator Bernie Sanders, who happens to be running for President, has introduced the "Robin Hood Tax" into the United States Congress on the Senate side. It is one part of his bill called the "College For All Act," S. 1373. Ellison's bill, as it turns out, it still pending in the House.

So, check out this website devoted to the "Robin Hood Tax." The legislation, if enacted, would impose a very small tax on financial transactions, so those who buy and sell stocks and bonds would help finance needed infrastructure and services to benefit the rest of us. As proposed, the tax would raise something like $300 billion each year. And it wouldn't drive those rich guys into poverty either.

For my part, I like it. I continue to think that Robin Hood was right!