#177 / A Sacred Presence In A Disenchanted World 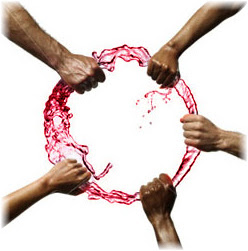 I have mentioned Pendle Hill Pamphlets in earlier postings to this Two Worlds blog. Pendle Hill is a study, retreat, and conference center located in Wallingford, Pennsylvania, and is operated by the Religious Society of Friends (Quakers). Pendle Hill publishes a series of little "pamphlets" on various topics, and the most recent one is entitled, Recovering Sacred Presence in a Disenchanted World, by Mary Conrow Coelho.

Coelho's little booklet is motivated by the following thought, as captured in a statement by Thomas Berry:

The human community and the natural world will go into the future as a single sacred community or we will both perish in the desert.

At least the way I read it, the suggestion here is that the "Two Worlds" I talk about in these blog postings will either be reconciled, somehow, and joined, or both the human world and the World of Nature will be irremediably damaged.

That sounds right to me.

Both Berry and Coelho are urging that a reconciliation of these Two Worlds occur in the realm of "the sacred." Berry was a Catholic priest. He was also a cultural historian, and he preferred to be called an “Earth scholar.” As a young woman, Coelho worked in a research physiology laboratory, so she is "scientific" in her her approach to religion and the sacred. What I found most interesting and valuable in her pamphlet, in fact, was the science part.

Coelho is arguing that it has become our habit to consider the World of Nature through the lens of what she denominates as "reductive materialism," which makes it easy for us to "regard the Earth as nothing more than a source of resources and a sink for our pollution." This means, as long as we hold this view, that we will "value other species only in terms of what they can provide to  us," and that we will "continue to unpick the fabric of life."

Coelho identifies "science" as being fundamentally associated with the "materialism" that has come to dominate our view of the world, replacing the "sacred" understanding of the world that is prominent in the thinking of native and indigenous peoples. This is exactly what Jerry Mander says, too, as reported here earlier.

Again, this sounds right to me.

Coelho's contribution to my thinking about this topic was in her argument that "science," as we think we know it, is not naturally allied with "reductive materialism" at all.

In a mini-chapter in her mini-book, Coelho discusses "New Understandings that Transform Our Assumptions," and the essence of these "new understandings" (scientific understandings, she means) is that the universe is not, actually, made up of "particles," but that the basis of the physical universe is "nonmaterial." If the basis of our physical reality is not "material," but the world is generated from "energy" and "empty space," there is an opportunity for a nonmaterial explanation for our origins, and our destiny.

I encourage people to read this little pamphlet.

Hope is not a strategy, but (what Coelho says) entropy is not a law!