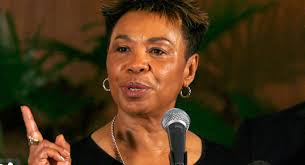 Congress Member Barbara Lee (pictured) has convinced a House Committee to include the following language in an appropriations measure:

Congress has a constitutional duty to debate and determine whether or not to authorize the use of military force.

In case you hadn't noticed, military force is, in fact, being employed in Iraq, and Syria, and elsewhere. No specific Congressional approval has been given for these military adventures.

So does this language actually compel the Congress to carry out the Constitutional duty it spotlights?

No. But it does acknowledge that the Congress is not doing its job.

To may way of thinking, that's not good enough!

It looks to me like Representative Tom Cole, a Republican from Oklahoma, shares my point of view. Here is what he says:


We are not only evading this responsibility on both sides of the aisle, quite frankly … but we are handing over war-making authority to the executive branch, to all future presidents, with both hands. It is a gigantic mistake not to do our job.

You can read an article about this right here.

Let me repeat my personal view: "Baby Steps" is not enough.