Yesterday, I was privileged to attend an 81st birthday party for Bruce Bratton. Bruce has been reporting on local political and cultural events in Santa Cruz County for something like forty-five years. This is not to mention his movie reviews!

Bruce communicates his thoughts and observations about local matters through a weekly radio program and in his online column. The radio program airs on KZSC Radio on Tuesday evenings, at 7:00 p.m., and is called the "Universal Grapevine." Bruce's weekly column, Bratton Online, is well worth reading. You can sign up for a free email subscription, and it will come right to you!

At the birthday party, I told a (totally true) story about how far Bruce's influence extends. Attending my 50th high school reunion, several years ago, I struck up a conversation with somebody whom I hadn't seen for about twenty-five years, and who told me he was living in Oregon. Despite the fact that he lived in Oregon, he seemed to know more details about what I was doing than I would ever have thought possible.

"Brooks," I said, "how do you know all thus stuff about Santa Cruz, since you live in Oregon?"

I found out a lot more about Bruce during the birthday party. Some attendees had done their research.

Here is an item I found particularly interesting: At one time, Bruce was a member of the illustrious Bohemian Club, and he met Bing Crosby through his Bohemian Club connections, while Bruce was performing with Bruce's band, the Goodtime Washboard Three, at the Bohemian Grove. Crosby invited Bruce and the band to perform on Crosby's show, at the Hollywood Palace, and they did! You can click this link to see the proof. At the end, Bing plays right along with them! Bruce made sure to let all the attendees know that they can buy the band's songs in the iTunes store

Bruce has a collection of toothpaste tubes and toothpaste boxes from around the world. That came out at the party. And he briefly served as station manager for a major radio station (KGO in San Francisco), was a small business consultant, and a political campaign consultant, not to mention serving as the Treasurer of the Santa Cruz County Fair. Bruce also played a key role in stopping the development of what is now the Wilder Ranch State Park. We wouldn't have saved the North Coast without Operation Wilder, which Bruce Bratton spearheaded, back in the early 1970s.

The "old time" stories were interesting. I was happy to be included in the celebration.

I not only wish Bruce a "Happy Birthday" on his 81st, I salute his indefatigable and ongoing involvement in community life. That's the way we create the "political world" that we most immediately inhabit.

Bruce is doing his part to make that world a better one! 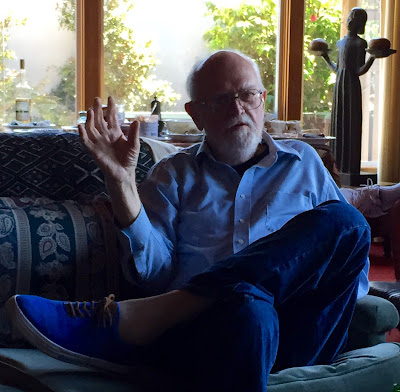