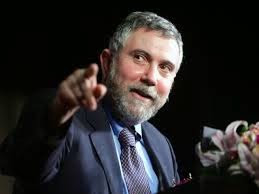 Economist Paul Krugman (pictured) often says worthwhile things. Here is what he said in his May 25, 2015 column in The New York Times:

At this point, the whole digital era, spanning more than four decades, is looking like a disappointment. New technologies have yielded great headlines, but modest economic results. Why? ... The answer is that I don’t know — but neither does anyone else. Maybe my friends at Google are right, and Big Data will soon transform everything. Maybe 3-D printing will bring the information revolution into the material world. Or maybe we’re on track for another big meh.

What I’m pretty sure about, however, is that we ought to scale back the hype. You see, writing and talking breathlessly about how technology changes everything might seem harmless, but, in practice, it acts as a distraction from more mundane issues — and an excuse for handling those issues badly. If you go back to the 1930s, you find many influential people saying the same kinds of things such people say nowadays: This isn’t really about the business cycle, never mind debates about macroeconomic policy; it’s about radical technological change and a work force that lacks the skills to deal with the new era.

And then, thanks to World War II, we finally got the demand boost we needed, and all those supposedly unqualified workers — not to mention Rosie the Riveter — turned out to be quite useful in the modern economy, if given a chance.

Of course, there I go, invoking history. Don’t I understand that everything is different now? Well, I understand why people like to say that. But that doesn’t make it true.

I agree with Krugman that our much-applauded "high tech" revolution is hardly the salvation of the world (or of the economy), and that what the Titans of V.C. want you to believe is more "hype" than anything else. It's "another big meh." High-tech innovation is not a road to riches (or to the good life) for any ordinary person, no matter what the high-tech "Masters of the Universe" may tell us so "breathlessly."

I also think Krugman is right that nobody really knows in any definitive way why our economy has tended to stall out, but I do have a theory. It's called "satiation."

Krugman always wants to "boost demand," but in our individualistic world, we have been trying to "boost demand" by stimulating ever greater individual consumption. (I just can't wait for that Apple Watch!). How much more, really, can we actually consume? As individuals, I'd like to suggest that we are pretty much reaching the limit. "Satiation" is what I'd call it!

If our economy is based on runaway individual consumption, as it largely is, there comes a time, after we have "eaten the World," that we just can't get our enthusiasm up to buy any more or eat any more!

This failure of individualized "demand" could actually be a blessing. Maybe it will arrest our runaway consumption before we do "eat the World" to the degree that there is nothing left but indigestion.

Now.... collective or community based efforts could "boost demand" in the economy, but that kind of new demand is not going to come in the form of new high-tech "apps" and more individual consumption. That kind of new demand will come in the form of (1) homes for every person in our society; (2) community parks; (3) schools and school teachers in every neighborhood; schools that you can get to by walking; (4) new solar and other renewable technologies, on a distributed power basis; (5) massive reforestation efforts...