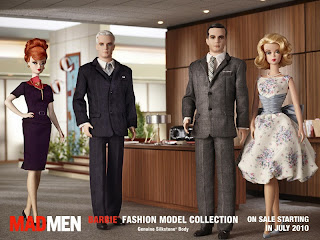 It turns out that the McCann-Erickson Ad Agency, featured in the AMC series Mad Men as the "bad guy" agency that ultimately takes over the "good guy" firm of which Don Draper is a principal, is actually a real ad agency. In fact, it has been for a long, long time.

McCann-Erickson may well be the world's most well-known and prestigious ad agency. But who knew? Well, probably most people! Shows how closely I follow advertising (not much)!

I am actually digressing, displaying my genuine surprise that I am truly so out of touch with a reality of which I presume most were aware. McCann-Erickson is real! I honestly did think, up until just a few days ago, that McCann-Erickson was a well-drawn figment of the imagination of Matthew Weiner. I hope I am not going to learn that Don Draper was an actual person, instead of a character in a television drama, and that Mad Men  was first conceived of as a biopic to run on the History Channel. Wikipedia, at least, thinks Don Draper is fictional!

Well, now on to what I wanted to say under the heading "We Know How You Feel."

I found out about the real existence of the McCann-Erickson Ad Agency from an article assigned to my students in the Legal Studies class I am teaching at the University of California, Santa Cruz. The class is titled, "Privacy, Technology, And Freedom," and I assigned the students a New Yorker article titled "We Know How You Feel." Somehow, I missed the reference to McCann-Erickson the first time I read the article, but I caught it when I re-read the article prior to last week's class session. That was probably because I had just watched that last segment of Mad Men, which I hated to see go.

At any rate, The New Yorker article was not about McCann-Erickson but about another company in the advertising business, Affectiva. Affectiva is the company that "knows how you feel." They use facial recognition software to map the emotional responses that people experience as they watch something. Affectiva started out as a company that had beneficent objectives in mind. They were going to try to figure out how to give autistic persons an ability to read other persons' emotions, so that they could make the  proper response, thus helping those suffering from autism to be able to function better in the "real world."

Pretty quickly, the principals of Affectiva decided they could make a lot more money telling advertising agencies about the emotional responses their ads were generating. So, that's their business now. Forget autism; Affectiva went for the gold.

The main software program that Affectiva uses is called Affdex. You can browse the Affectiva website to learn more, and you can even try out the Affdex program, if you'd like to do that.

Before you do any of that, I recommend that you read The New Yorker article. A program that helps advertising agencies sell you Doritos or Coke (they are both bad for you) is one thing. That's bad enough. But a program that "knows" what you think, and what you feel, can have many much more nefarious purposes. Just try getting a job, or getting admitted to a graduate program, or finding a date, if the program doesn't show the kind of "true" emotions that whoever is talking to you is looking for.

"Freedom" (that's one of the topics I'm covering in my class) is based on the idea that the reality we inhabit can be transformed, and that we can genuinely change both our actions and our reactions to whatever may now exist, as we take steps towards creating something genuinely new.

Filtering our view of the world through Affdex - taking its results as reflecting the "reality" of what we really feel - isn't going to help those who want to change the world!