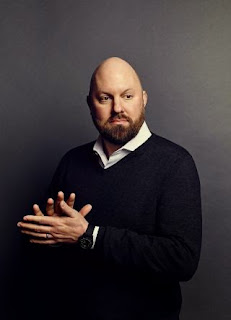 When I was younger, "V.C." meant the "Viet Cong," the military patriots of North Vietnam (not generally recognized as patriots by most in America), whose commitment to their country ultimately led to the United States' most significant military defeat, ever.

Nowadays, "V.C." means "Venture Capitalist," or sometimes "Vulture Capitalist" by those not greatly enamored of persons who make their living investing huge sums of money to benefit (above all) themselves. The V.C. have as their main habitat the fertile and porous soils of Sand Hill Road, located in Menlo Park, California, which is generally held to be the "center of the V.C. universe."

Pictured above is a much admired V.C., Marc Andreessen one of the principals in Andreessen Horowitz. This V.C. firm insists, on its website, that "Software is Eating the World." The New Yorker is calling Andreessen "Tomorrow's Advance Man."

I liked The New Yorker article, but it didn't make me love Andreessen, Andreessen Horowitz, or what might be called the "V.C. project." The ultimate objective of all those involved in V.C. is described this way in "Tomorrow's Advance Man":

Venture in the Valley is a perfect embodiment of the capitalist dynamic that the economist Joseph Schumpeter called “creative destruction.” Weissman said, “Silicon Valley V.C.s are all techno-optimists. They have the arrogant belief that you can take a geography and remove all obstructions and have nothing but a free flow of capital and ideas, and that it’s good, it’s very good, to creatively destroy everything that has gone before.”

"Eating the world," right? My world. Your world. Our world. "Arrogant" does seem to capture the essential element of the V.C. project.

Once those Venture Capitalists eat it, it's "their" world.

Which kind of explains the increasing income (and other) inequality that results when those with money "destroy everything that has gone before."