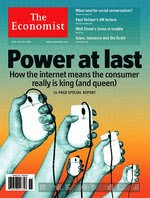 Verizon bought AOL. That's big news in the business world! I read all about it in the May 14, 2015 edition of The New York Times. According to that Times article, this could be a very good thing for you and me. Alberto Canal, speaking for Verizon, says this: "There's been an epiphany here that we live in the age of the empowered consumer."

Well, maybe so! The Economist, as you can see, seems to have that same idea. All power to the consumer, and life is good. Right?

Well, maybe so! But just to provide a different perspective, let's think about putting the emphasis on the "consumer" part of this description, instead of on the "empowered" part.

The modern economy, having reached an "epiphany" in its realization that we need to "empower" the consumer, is relying on the fact that these consumers (you and I) are being empowered to ... consume!

Well, maybe so! But make way for ducklings, consumers!

Consider the fate of those ducks and geese subjected to that empowered form of consumption known as gavage.

Are we, as empowered consumers, more or less playing the role that those ducks and geese play in the production of foie gras? You know, the ducks and geese get to consume, to fatten their livers, and those livers are then are torn out of their bodies to be eaten by fancy diners around the world. Some people call them the 1%'ers.

Lots of people think this process should be classified as animal abuse. We probably need to think about that analogy before we celebrate too much about our increasing and ever more "empowered consumption." 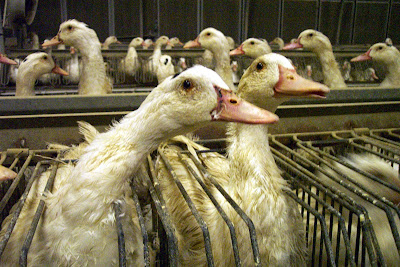