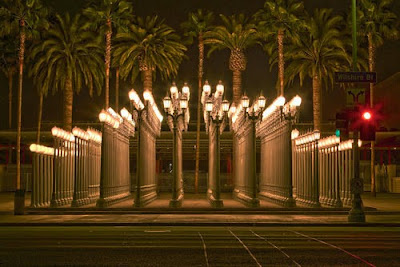 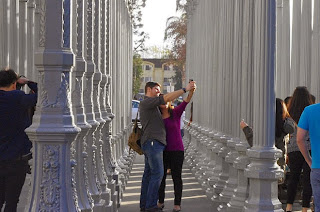 Pictured above are two different views of an installation by Chris Burden, a performance artist who died on Sunday, May 10, 2015. The pictured installation is titled "Urban Light," and was first illuminated in 2008. Because of its permanence and its prominence (it is located at the main entrance to the Los Angeles County Museum of Art), it will undoubtedly be the work for which Burden is most remembered.

An obituary by Adrian Glick Kudler, published in Curbed Los Angeles, observes that:

Before "Urban Light," Burden's most famous work was 1971's "Shoot," for which he stood in a gallery in Santa Ana and let a friend shoot him in the arm with a .22 rifle from 15 feet away. In an appreciation for Burden published yesterday, New York magazine art critic Jerry Saltz writes that the piece turned the artist's body into "A living sculpture come to dangerous life in the blink of an eye, sacrificing for his work while enacting a complex sadomasochism of love, hate, desire, and aggression." Burden's early art was full of violence, mostly self-directed; he made the agony of artistic creation literal, and public.

Before "Shoot," Burden performed the "Five Day Locker," described as follows and pictured below:

At the University of California, Irvine, Chris Burden locked himself in Locker Number 5 for five consecutive days. He rigged the locker above him to hold five gallons of bottled water, while the locker below him held an empty five gallon bottle ... Five Day Locker marked the beginning of Burden's early body works, where his performances centered around physical feats putting his own body under duress. 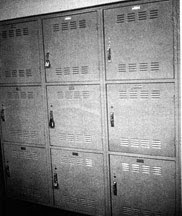 "Locker" was counted as Burden's 1971 graduate thesis. I think I might have been tempted to call that "Locker" piece by a different name: "Just Passing Through." While the piece does, perhaps, convey a message worth pondering, I am personally pleased that Burden emerged from the dark of that five-day lockup, survived his shooting, and then left us a monument with a different message.

We may, ourselves, be simply passing through. But when we go we can leave light behind.