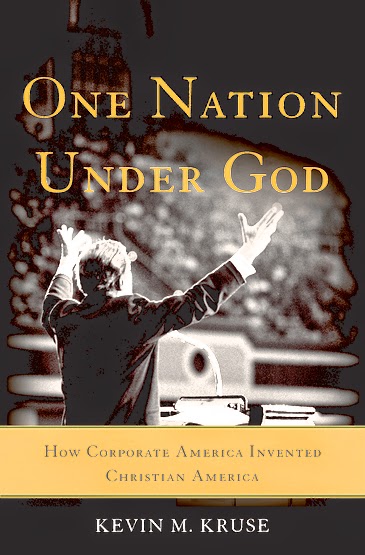 You can buy Kevin Kruse's book by clicking right here. If you would like the cheap way to get the gist of his argument, click on this link. That will take you to Kruse's column appearing in the Sunday, March 15, 2015 edition of The New York Times.

Kruse "started his first company when he was just 22 years old," and then "worked around the clock, literally living out of his one-room office and showering each day at the YMCA, before giving up a year later deeply in debt."

Ultimately, it appears that Mr. Kruse discovered "the power of Wholehearted Leadership and Employee Engagement ... [and] went on to build and sell several, multimillion dollar technology companies, winning both Inc 500 and Best Place to Work awards along the way."

It appears that Mr. Kruse is a business wunderkind.

In his book, Kruse argues that the idea that the United States is a "Christian" nation is, essentially, a business plot. Or maybe I should say a business "public relations ploy."

Plot or ploy, Kruse says that business executives promoted "Christian libertarianism," and used President Eisenhower ("I Like Ike") to enshrine this phony religiosity into the heart of our civic culture:

Uncoupling the language of “freedom under God” from its Christian libertarian roots, Eisenhower erected a bigger revival tent, welcoming Jews and Catholics alongside Protestants, and Democrats as well as Republicans. Rallying the country, he advanced a revolutionary array of new religious ceremonies and slogans.The rest of Washington consecrated itself, too. The Pentagon, State Department and other executive agencies quickly instituted prayer services of their own. In 1954, Congress added “under God” to the previously secular Pledge of Allegiance. It placed a similar slogan, “In God We Trust,” on postage that year and voted the following year to add it to paper money; in 1956, it became the nation’s official motto.

During these years, Americans were told, time and time again, not just that the country should be a Christian nation, but that it always had been one. They soon came to think of the United States as “one nation under God.” They’ve believed it ever since.

Here's my message: STOP BELIEVING IT!

If there is one good thing that the United States might contribute to the peace of the world, it is our truly revolutionary idea that "religion" should have absolutely nothing to do with politics, government, and our civic life. Religion is a matter of personal faith, and we are supposed to keep it that way. War and violence proliferate where this rule is ignored. In Iraq and Syria, in Belfast, and throughout the Middle East.

Let's not be beguiled by the public relations plot and ploy that Kruse has documented for us. Let's not forget the gift that the Framers gave:

To the degree we forget this absolute prohibition, the very first statement in our Bill of Rights, we deliver ourselves into a world in which Twain's War Prayer is our everyday text, and the pictures linked above find a counterpart right here.

Read the newspaper. Watch TV. You don't want to go there!