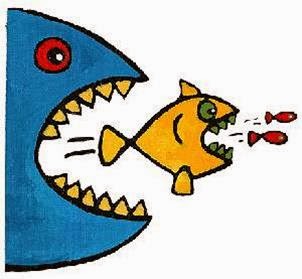 The image above is from the website of a group called Coalition for a Sustainable Delta. The group describes itself this way on its website:

The Coalition for a Sustainable Delta is a not-for-profit organization comprised of water users who depend on the Delta for conveyance of a large portion of their water supplies and individuals who utilize the Delta for aesthetic and recreational enjoyment.

Believe me, the basic thrust of the group is not to focus on the "aesthetic and recreational enjoyment" of those who utilize the Delta. If you'd like to join a group that actually does care about those issues, I'd suggest your prompt and generous contribution to Restore The Delta.

The Coalition for a Sustainable Delta is actually a group representing major agricultural water users. To quantify the group's concern for a "sustainable" Delta, I would suggest that you pick a number between zero and none.

How do I know that the Coalition for a Sustainable Delta doesn't care anything about the "sustainability" of the Delta? I know that because I read the group's recent Letter to the Editor in the San Jose Mercury News. I am reprinting that letter in its entirety, below:

Time and time again, activists continue to exaggerate the amount of water used by agriculture in California and blame the industry for excessive use during the drought. It's truly unfortunate when the media simply regurgitates those misleading characterizations of water use, as this newspaper (Editorial, Feb. 25) did last week.

The truth is that 50 percent of California's total water availability is devoted to the environment. Fish and aquatic wildlife use half of the state's water, according to the Public Policy Institute of California, and this fact cannot be ignored.

Agriculture does account for the largest human use of water, relying on approximately 40 percent of the state's water supply to grow food and fiber in America's food basket. Growing the crops that feed a continually expanding world population is certainly among the most important human uses of water. Urban water use accounts for the remaining 10 percent of the state's water usage.

Activists seeking to demonize agriculture have repeatedly misrepresented farm water use while conveniently ignoring water use for the environment.

Mr. "Golden Mouth" (and that is the literal translation of Boccadoro), speaking for the Coalition, claims that unspecified "activists...exaggerate the amount of water used by agriculture." While he doesn't name these activists, it would appear that he must not mean Restore The Delta.

Restore The Delta is definitely an "activist" group, and in fact is the most prominent activist group working to protect and restore the Delta, and thus to prevent the collapse of the largest estuary on the West Coast of the United States. Restore The Delta has published a chart titled "Where Does Delta Water Go, And What For?" That chart says that 55% of Delta water goes for agriculture, "often to grow almonds, cotton, and pistachios for export."

Central Valley farmers, who suck up 80 percent of the water used in California, have proved that they have an unquenchable thirst for additional water to irrigate their crops. They've already sucked dry their own aquifers and irresponsibly planted thousands of acres of almond orchards without sufficient guarantees that water would be available during California's inevitable drought years.

If the "sustainability" of the Delta is actually something we care about, the facts and figures about agricultural water use are interesting but not ultimately revealing. What is truly revealing about what the Coalition for a Sustainable Delta stands for is the group's observation that "the truth is that 50 percent of California's total water availability is devoted to the environment. Fish and aquatic wildlife use half of the state's water, according to the Public Policy Institute of California, and this fact cannot be ignored."

The implication here is that the World of Nature, the world that sustains all life (and the world that is called "the environment" in conventional parlance) is somehow "using" its own natural systems in ways that unfairly tip the scales in favor of the Natural World."

It would be hard to find a better illustration of our human failure to understand that we depend on "the environment," as opposed to the environment depending on us.

"Sustainability" refers to the idea that we should not allow our own activities to undermine the ability of the Natural World to "sustain" life. Anyone who thinks that Nature's "use" of water to sustain all life should be considered a "use" that is equivalent to, and that should be weighed against, "uses" like irrigating pistachio trees to grow nuts for export, has totally failed to comprehend what "sustainability" is actually all about.

Speaking of "nuts," I'm convinced that is exactly what this Letter to the Editor shows the Coalition for a Sustainable Delta to be.