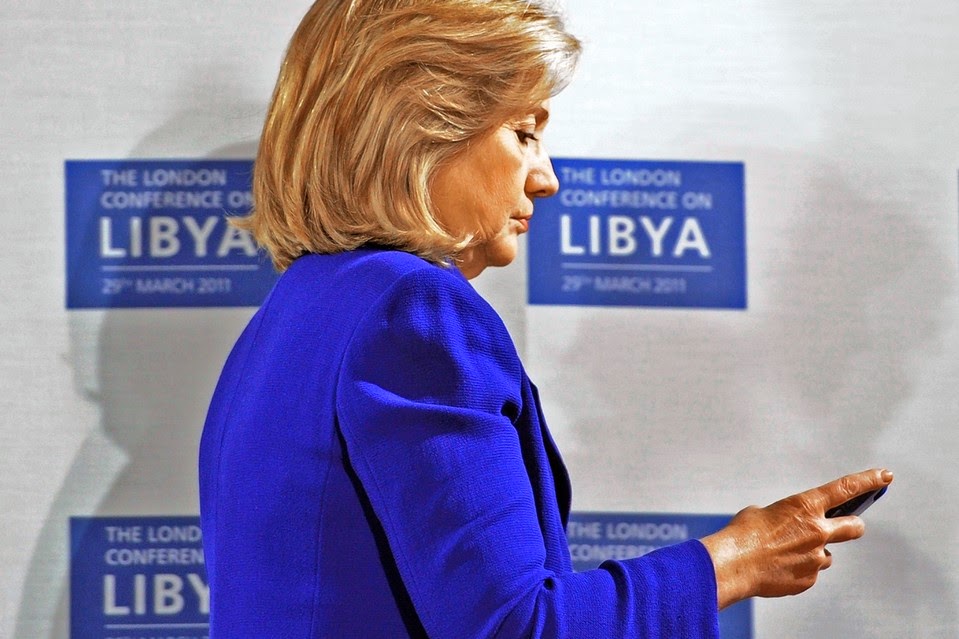 Pictured: The next President of the United States. Or not. Nothing is automatic.

This picture of Hillary Clinton, consulting her cell phone during the time she served as Secretary of State, is the image that headed up a column in the Friday, March 6, 2015 edition of The Wall Street Journal.

Kimberley A. Strassel, who wrote the column, entitled "Hillary's Email Escapade," is known for commentaries that shed a rather negative light on all things liberal, and especially on the Democratic Party and its leadership. The "Email Escapade" column does not fail to carry forward this long tradition.

I am not, generally, a fan of the Strassel perspective. However, it does seem to me that Strassel has a point in this case. I recommend this column. It is worthy of your review.

Hillary Clinton, while serving as this nation's chief diplomat, and in contradiction to the requirements of federal law and regulations, used a private email account for all of her diplomatic correspondence, instead of using her official email account at the Department of State. You may well have read the news stories about this, as I did, but it was not until I read Strassel's column that I got the full picture.

When I read the first news stories on this matter, I did immediately conclude that Hillary Clinton was being "tricky." Par for the Clinton course, as Strassel notes. And let's admit it, however much you might be a Clinton supporter, using a "private" email account to bypass the "official" requirements binding on all other federal employees (including the President) does count as being "tricky."

What I found out from Strassel's column, however, was that this particular "Email Escapade" was SUPER tricky.

Congressional Committees representing, however well or badly, the American public, would be able to subpoena the records of private companies, to gain access to the public information that Hillary Clinton has taken steps to conceal from the public. That is, they could do that if Hillary Clinton's "private" email resided on the servers of such private companies. And if Congressional Committees did do that, they would expect to get all of the emails that went through the Hillary Clinton private account.

Because of Hillary Clinton's "super" tricky (and I bet rather expensive) decision to create her own, private, small-scale server farm, right inside her own home, and totally under her control, the public will never reliably know about the public correspondence of Hillary Clinton when she was Secretary of State. That is the point Strassel makes, and a point that I think is totally valid.

I, personally, take this seriously. As I said in my blog posting yesterday, when secrecy "uncouples governmental actions from any meaningful review by the people who are supposed to be in charge of the government" the result is the effective termination of democratic self-government itself.

When Hillary Clinton comes to our table (perhaps at a small cafe in Iowa or New Hampshire), and says, "Hi, I'm Hillary; I'll be your server...." we should probably wonder who will be serving whom.