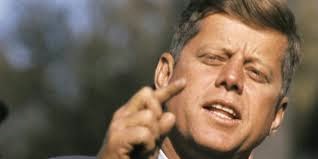 In 1960, John F. Kennedy, Democratic candidate for President, made a trip to San Francisco, speaking at the Cow Palace, and attending a major fundraising dinner at a downtown hotel in San Francisco prior to the speech. I was then a senior at Palo Alto High School. My father, an executive at an electronics company based on the Peninsula, took my mother and me to the dinner (and then to the speech), and I got to shake Kennedy's hand, personally, as he left the hotel. This was an inspiring moment for me, and I got to brag about the handshake in Mr. Thornton's U.S. History class the next Monday, too.

It appears that David Axelrod, who played a key role in President Obama's 2008 election, and who then served as Senior Advisor to the President until 2011, had a similar encounter at a campaign rally in New York City. Axelrod was only five years old, however, when he became inspired by the future President.

I learned about Axelrod's encounter with Kennedy from a Wall Street Journal review of Axelrod's recently-released memoir, Believer: My Forty Years in Politics. Here is what Axelrod said about the impact that Kennedy had on his life. It is the same message that I have found so compelling in mine:

We are masters of our future, and politics is the means by which we shape it.