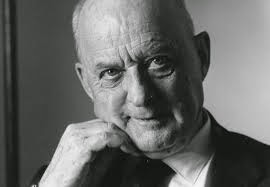 Ross Douthat, who is an opinion writer for The New York Times, wrote a recent column entitled "Obama the Theologian." In that column, Douthat observes that our President is "a professed admirer of Reinhold Niebuhr."

Niebuhr (pictured above) was among the most "political" of our theologians. He is known for his "Christian realism," and did, indeed, as Douthat notes, suggest that "no society is innocent."

It was this insight that Obama sought to deploy in his recent remarks at the National Prayer Breakfast, held on February 5th.

The President was roundly criticized for advancing beyond his well-received and very acceptable denunciation of Islamic radicals for distorting religion to justify wars and violence. The President got plaudits for issuing the expected denunciation, but the President went on to suggest that our own society is implicated in very similar distortions:

"Humanity has been grappling with these questions throughout human history,” [the President] told the group, speaking of the tension between the compassionate and murderous acts religion can inspire. “And lest we get on our high horse and think this is unique to some other place, remember that during the Crusades and the Inquisition, people committed terrible deeds in the name of Christ. In our home country, slavery and Jim Crow all too often was justified in the name of Christ.”

Douthat compared Obama's recent pronouncements to President Eisenhower's Farewell Address to the Nation, which warned against the dangers of the military-industrial complex.

Eisenhower, like Obama, was basically suggesting that Americans should heed the advice of Matthew 7:5, and "first take the log out of your own eye, and then you will see clearly to take the speck out of your brother's eye."

Douthat's conclusion is that Obama's speech failed, and that Eisenhower's succeeded. In the case of Eisenhower, it was Eisenhower's own political party that was facilitating and advancing the actions against which Eisenhower spoke. Thus, he truly criticized himself. Not so for President Obama, according to Douthat:

The deep problem with his Niebuhrian style isn't that it's too disenchanted or insufficiently pro-American. It's that too often it offers "self"-criticism in which the president's own party and worldview slip away untouched.

I think Douthat has a point, particularly considering the fact that President Obama continues to assert his unique right to murder people anywhere in the world, based on his judgment that the people he targets "might" do the United States some harm in the future, or that they otherwise "deserve to die."