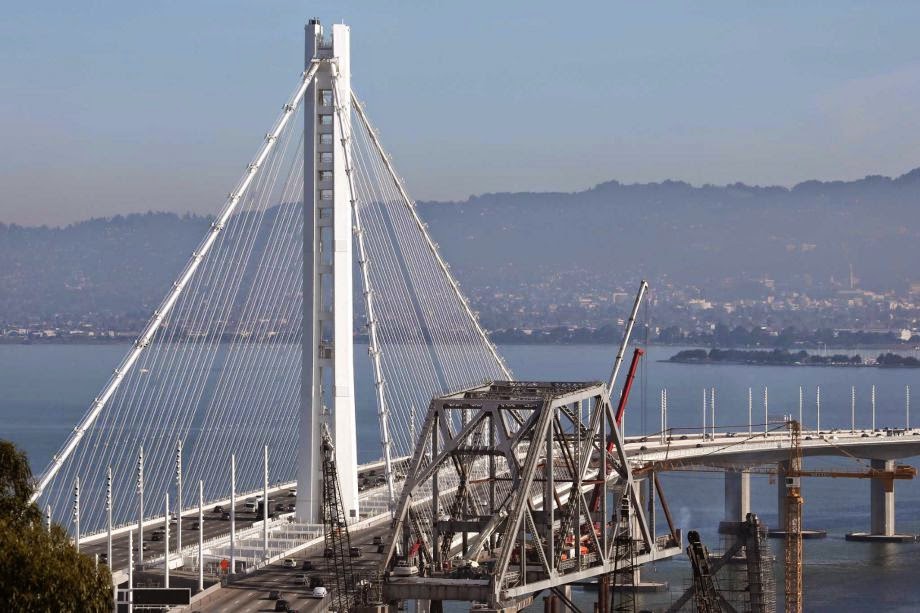 The Bay Bridge boondoggle is a story I have watched from afar. For those who have not watched that story, the basic point is that the project was massively over budget, massively over deadline, and that the bridge built may contain hidden dangers because of manifold construction flaws. At the very least, there will be elevated maintenance costs over the lifetime of the bridge.

Now, we find out something new. According to a story in the February 4, 2015 edition of the San Francisco Chronicle, "a $4 million elevator intended to take maintenance workers and well-connected investor-tourists to the top of the signature tower on the new Bay Bridge eastern span failed after just a few uses, and Caltrans is trying to figure who will pay the bill."

Well, there is something new in this latest story. There is something beyond the cost overruns and the construction flaws that seem to have plagued the Bay Bridge project in general. That story is just "same old, same old."

My interest, however, was piqued by those "well-connected investor-tourists." What's that all about?

As it turns out, the bridge design provided for an elevator for workers to get to the top of the tower, so they could do inspections and necessary maintenance on the cables that hold the bridge up. Fair enough. The cost for that was apparently $800,000.

Then, bridge officials decided that this elevator should be redesigned for another purpose, too: "to use it to show off 360-degree views of the Bay Area to investors who purchased bonds that helped pay for the span." That "sent the price soaring to $4 million."

Bridge officials, in other words, decided to spend $3.2 million dollars of taxpayer/toll payer funds to build an elevator to take bond investors to the top of the tower. A spokesperson said "we were ensuring anyone who had a vested interest, our partners" would be able to ride up on it.

"Partners," huh? The officials who are in charge of the bridge apparently believe that rich people who will be paid millions of dollars in interest should be considered "partners," and given privileged and exclusive rides to the top of the bridge - and that the ordinary members of the public, who will pay the construction costs, the increased maintenance costs, and the interest costs that will go to these rich "partners" should actually be required to pay $3.2 million more than they otherwise would have had to pay, so a few rich people can get what will be, I am sure, an incredible view.

That's how the world works now, in what was once a democratic society.