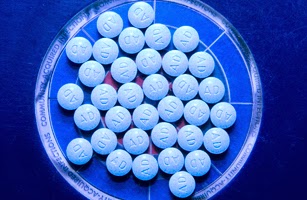 Until I read a Caille Millner column in the San Francisco Chronicle last Saturday, January 31st, I didn't even know the term "nootropics." Click on the link if you'd like to see what Wikipedia has to say about them. They are "smart drugs, memory enhancers, neuro enhancers, cognitive enhancers, and intelligence enhancers." Adderall, pictured above, is apparently counted as a nootropic, and is apparently widely used. But Millner promotes ones that sound more "natural." That is, if you think it's natural to ingest things like "modafinil with krill oil." Looks to me like "nootropics" is moving into the world of commerce! Click the link for a "Beginners Guide."

I am not one who favors the use of chemical additives to enhance my human experience, or to improve my performance. While I went right through the middle of the psychedelic revolution of the 1960's, I have never tried any mind-altering substances. Sometimes, I wish I had ... but not really! That's my personal bias, of course, and I am not judgmental about those who indulge, or who have indulged, in drug use to achieve "mind-altering" effects. Take my friend Lee Quarnstrom, as an example. He was a great reporter for the San Jose Mercury News, and covered Santa Cruz County government for many years. His recently-released book, When I Was A Dynamiter!, documents his use of lots of mind-altering substances. Lee was one of the Merry Pranksters, and has been married seven times. Read the book for a good story. Seems like all those drugs made for a "good trip" for Lee.

Here is my observation, however, about "nootropics," at least as explained by Millner. As I read her column, these drugs are actually not intended to expand your individual consciousness, or to provide you with an avenue into worlds of perception that would otherwise be unavailable. In fact, nootropics seem to be used to make it possible for people to perform better for the reigning bureaucracies, in the realms of education and employment.

That's not that appealing; at least, not to me. I am sticking with the brain I was born with, but if I were going to ingest chemicals, to change my consciousness or capabilities, I think I'd go with the psychedelic variety!

Stay up all night to code more? I think I'd rather see Lucy in the Sky With Diamonds.

But that's my bias.