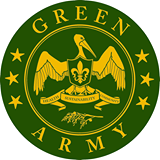 I read about the Green Army in the January/February 2015 edition of Mother Jones. The Green Army is an environmental coalition that is based in and focuses its efforts on the state of Louisiana. It has a website, of course, and also also a Facebook page. The website lists the logos of a number of the groups that are apparently part of the Green Army, but almost all the references to the Green Army that I can find are really about Lt. Gen. Russel L. Honoré. The Facebook page says he gets the credit for "forming" the alliance.

Mother Jones calls Honoré "a tough-talking, butt-kicking officer [who] became one of the South's top environmental crusaders." Honoré has written a book called Leadership In The New Normal. Honoré is clearly big on "leadership." Someone has to do it. Why not him?

In August 2009, asked whether he would run for a seat in the United States Senate, the General is quoted as saying that he had no plans to run. According to the Mother Jones' account, he is now seriously thinking about running for Governor of Louisiana.

I am always a little suspicious of military metaphors.

I also get nervous when the Generals clearly think that they are more important than the soldiers, or when a so-called "leader" wants to take individual credit for "forming" an alliance.

I think I'm going to wait a bit before I join up with the Green Army!