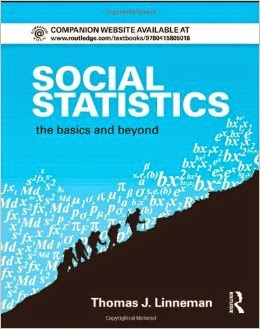 I am not recommending this book (though I don't have anything against it, either; it may be great). This time, the image is only for the title: Social Statistics.

As a supporter of The Hannah Arendt Center For Politics And Humanities At Bard College, I am able to participate in a virtual book group that is currently focusing on Arendt's book, The Human Condition (and I do recommend that book).

In the online session held on Friday, January 9th, the group focused on Arendt's reference to statistics on Page 42. She says:

The laws of statistics are valid only where large numbers or long periods are involved, and acts or events can statistically appear only as deviations or fluctuations. The justification of statistics is that deeds and events are rare occurrences in everyday life and in history. Yet the meaningfulness of everyday relationships is disclosed not in everyday life but in rare deeds, just as the significance of a historical period shows itself only in the few events that illuminate it. The application of the law of large numbers and long periods to politics or history signifies nothing less than the willful obliteration of their very subject matter....

As I mentioned in this blog yesterday, I subscribe to Arendt's view that our freedom consists in our human ability to do something new and unexpected, and thus to create a new world. "Politics" is the activity in which we do this together.

In describing my overall understanding of how the human world works, I have made an effort to distinguish "our" world from the World of Nature, into which we are born, and which we do not create. In the World of Nature, laws are descriptive, informing us of what must and will be. In "our" world, the human world we create by our political actions, a world that is often called "civilization," laws are not descriptive, but prescriptive. They tell us not what must and will happen, but what we want to happen.

Our human laws are essentially instructions to ourselves, in which we tell ourselves what we ought to do, to create a world that we will find meaningful, and in which life will be worth living. This "political" world is a world in which our human freedom is preeminent. The World of Nature is constrained by necessity (and we have lots of problems when we ignore that fact).

Reading Arendt's thoughts on "statistics," I suddenly understood that modern social science, employing statistics to understand "reality," does us a fundamental disservice, since it is true that there are "laws" of statistics that are analogous to the laws of Nature, in that they do describe, in many ways, what does and will happen.

Such social statistics, though, ignore the inherent freedom that allows us to "break" the statistical laws that will otherwise define "what happens." If politics is how we "make" history, we make it by doing something unexpected and new, something not predictable by the statistical laws that we have come to think of as determinative, and that we too often believe are equivalent, in the human realm, to the law of gravity, as it acts in the World of Nature.

Statistics don't "lie," but they fail to represent the full truth of our real situation. Statistical laws appear to define a reality that is inevitable and "must be." That, however, is not correct. And why is that not correct?

We each have the gift of freedom!