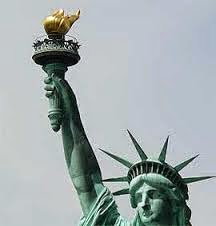 The Hannah Arendt Center publishes a blog titled Amor Mundi (love of the world). It comes to my email inbox on a weekly basis. Click the link if you'd like to sign up.

On January 4th, Amor Mundi had a brief commentary on an essay on "liberty" that appeared on the First Things website.

First Things is published by the Institute on Religion and Public Life, an "interreligious, nonpartisan research and educational organization." Founded in 1990 by Richard John Neuhaus and his colleagues, the Institute was created as a way to "confront the ideology of secularism, which insists that the public square must be 'naked,' and that faith has no place in shaping the public conversation or in shaping public policy."

The blog posting synopsized by Amor Mundi was "Taking The Long Way," by Yuval Levin, identified by Wikipedia as "probably the most influential conservative intellectual of the Obama era."

The Amor Mundi synopsis of the longer Levin article said this:

Yuval Levin argues that our basic understanding of liberty today is wrong. Both liberals and libertarians see liberty as the absence of constraint, the liberty to do and to choose as one wants. He [Levin] suggests that Supreme Court Justice Anthony Kennedy's opinion in the 1992 abortion case Planned Parenthood v. Casey encapsulates the modern bi-partisan version of liberty: "At the heart of liberty is the right to define one's own concept of existence, of meaning, of the universe, and of the mystery of human life." Opposed to what Levin calls this thin version of liberty (what is usually referred to as negative liberty) is a thicker liberty bound up in institutions that demands that individuals not only be free to choose, but that they be free to choose well. This, what is usually called positive liberty, assumes that we humans are not simply willful beings but that we are also rational, and that rationality means something. It contains standards and truths. For Levin, one element of this rational liberty of limitation is the family.

Persons interested in this topic might want to read the Levin article in its entirety. I agree that "liberty" is not fully defined by considering it as merely the absence of any constraint upon individual action. I am a lot less clear that spokespersons for particular world views, including the "religious" world view, have a good case that the concept of "liberty" requires adherence to particular religious or cultural norms presented as "rational." It appears from the synopsis that Levin might be someone who has this idea in mind. I am not sure that this is a totally accurate presentation of Levin's views, having read the entire Levin essay, but to the degree that this is what Levin would argue, I disagree.

I do agree, however, with Levin's extended critique of any analysis of "liberty" that reduces liberty to a simple ability of individuals to do whatever they want, individually. A too great emphasis on "individualism," in my opinion, is the scourge of our contemporary life. Who are we? We are definitely individuals, but we are not only individuals. Since we are not, our notion of "liberty" should reflect and include our ability to come together with others, to associate and organize ourselves in collaboratives and collectives, and to determine, in that context, what we decide is "rational."

As I find is so often the case, the First Amendment gets it right, including its demand that we protect not only freedom of speech, an individual liberty, but our freedom of association, a political and collective freedom which is essential to our ability to construct a human world in which we want to live.