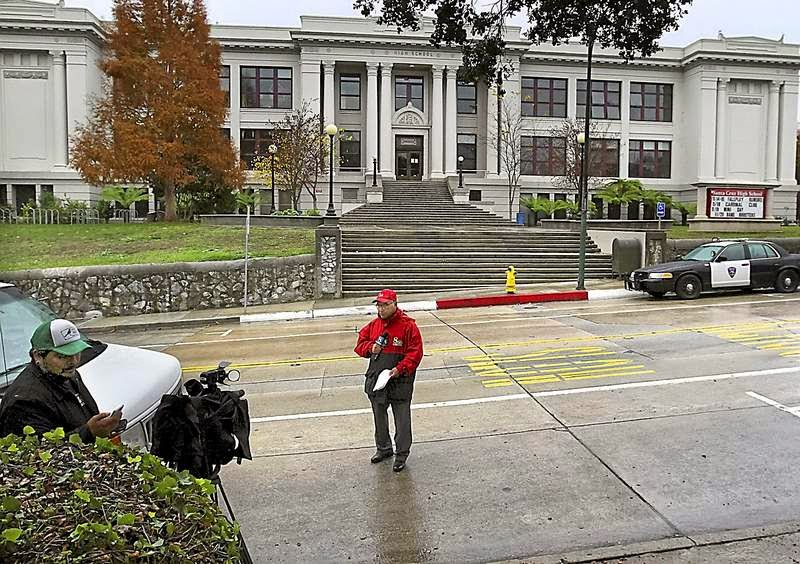 All classes were cancelled at Santa Cruz High School on Wednesday, November 19, 2014. Classes were cancelled because the school received a credible threat that there would be a mass shooting at the school. As you can see from this picture of the High School, printed in our local newspaper, there was a little rain. That was unusual, considering the drought that California has been experiencing.

School shootings, sad to say, are not that unusual. Check this list, available online. documenting school shootings in the United States. Since the year 2000, there have been an average of eleven school shootings each year, and on Thursday November 20th, the day I am posting this, the list got longer; at least two people were shot, early in the morning, at Florida State University.

A school shooting is defined for the purpose of the list I have referenced as an occurrence in which an individual discharges a gun at an educational institution, such as an elementary school, secondary school, or post-secondary institution.

Some people think that putting armed security forces into the schools is the way to deal with the problem.

Maybe some classes in nonviolence!

* Shortly after the school shooting on February 14, 2018, at the Marjory Stoneman Douglas High School in Parkland, Florida, I was contacted by a representative of the "Parenting Pod" website, who suggested that anyone reading this blog posting might like to see what Dr. Catherine Munson thinks. Munson is a retired psychiatrist with over twenty-five years clinical experience, who works as a freelance writer for Parenting Pod. Click right here for Dr. Munson's thoughts.