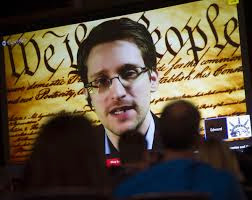 The picture on my Two Worlds blog yesterday showed the cover of the November 17, 2014 edition of The Nation.

Yesterday's posting was actually about a story from an earlier edition of the magazine, so let me now comment on the cover story from the November 17th edition, titled "Snowden in Exile." I encourage you to read it; it is an exclusive interview with Edward Snowden by Katrina vanden Heuvel and Stephen F. Cohen. Cohen is a professor emeritus of Russian studies at New York University and Princeton. Vanden Heuvel is the editor and publisher of The Nation.

Cohen and vanden Heuvel traveled to Russia to meet with Snowden. Here is one thing that Snowden said in his interview:


We are a representative democracy. But how did we get there? We got there through direct action. And that’s enshrined in our Constitution and in our values. We have the right of revolution. Revolution does not always have to be weapons and warfare; it’s also about revolutionary ideas. It’s about the principles that we hold to be representative of the kind of world we want to live in. A given order may at any given time fail to represent those values, even work against those values. I think that’s the dynamic we're seeing today. We have these traditional political parties that are less and less responsive to the needs of ordinary people, so people are in search of their own values. If the government or the parties won’t address our needs, we will. It’s about direct action, even civil disobedience. But then the state says: “Well, in order for it to be legitimate civil disobedience, you have to follow these rules.” They put us in “free-speech zones”; they say you can only do it at this time, and in this way, and you can't interrupt the functioning of the government. They limit the impact that civil disobedience can achieve. We have to remember that civil disobedience must be disobedience if it’s to be effective. If we simply follow the rules that a state imposes upon us when that state is acting contrary to the public interest, we're not actually improving anything. We're not changing anything.

"Voting" is how we choose our representatives. As I have been saying recently, however, prompted by thinking about the November 4th election, "voting" is not the essence of democracy. Voting is one tool that helps make "representative" democracy work. But when the representative approach doesn't work (and does anyone think it's working?) then "direct" action is required.

Snowden makes a good case, in his interview, that the state is extending its power over individuals, and that we (the individuals) are letting this happen. Snowden's revelations about the government's secret spy program - targeting every one of us - were intended to stimulate action from those whose liberties are being taken away, even as we speak.

"Speaking" is important, as we know. It's featured in the First Amendment. Our right to "free speech" is our primary liberty, and the essential guarantee of our freedom.

So, when things are going wrong, it's time to "speak out," and to start taking "direct action," as Snowden suggests.

That is what Snowden did.

Since he is in exile, the ball's in our court.