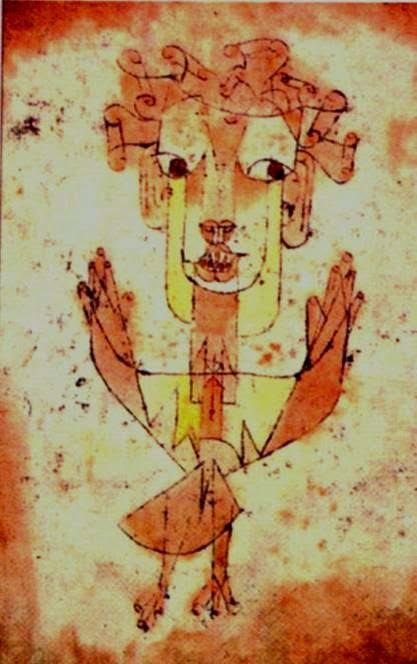 I like to think about the nature of time and history, and our human place in relationship to both. The image above is by Paul Klee, and is titled Angelus Novus. Walter Benjamin has written an insightful interpretation of this painting, which I have mentioned before. I see some similarities between Benjamin's thoughts and the wonderful insights of Hannah Arendt, which I have also mentioned.

Arendt sees our essential human position as being Between Past and Future, the title of one of her best books. We are inevitably stuck between a past which pushes us forward and a future which repels us, and from which we recoil, seeking always to go back. Our fondest desire would be to get above the fight, and to be observers, rather than fighters in the middle. Alas, that is not our fate.

Benjamin's idea is that the past has essentially "exploded," and that we, like his new angel, are driven into the future by the explosive force of past history, as we face not towards the future, to which we are traveling, but always backwards, trapped in the vision of where we have been.

Jos Houben, an acclaimed actor, and married to my niece Emily, suggested a book to my wife Marilyn. I got to read it, too. The Assault, by Harry Mulisch, is truly a masterpiece. I recommend it. In The Assault, Mulisch also presents a reflection on time and history, which I quote below. There is something of Klee and Benjamin in Mulisch's treatment of the subject, but with some other insights besides:

And then ... and then ... and then ... Time passes. "That, at least, is behind us," we say, "but what still lies ahead?" The way we word it, it's as if our backs were turned to the past as we look toward the future; and that is, in fact, how we actually think of it: the future in front, the past behind. To dynamic personalities, the present is a ship that drives its bow through the rough seas of the future. To more passive ones, it is rather like a raft drifting along with the tide. There is, of course, something wrong with both these images, for if time is movement, then it must be moving through another kind of time, and the secondary time through yet another; and thus time is endlessly multiplied. This is the kind of concept that does not please philosophers, but then, inventions of the heart have little to do with those of the intellect.


Besides, whoever keeps the future in front of him and the past at his back is doing something else that is hard to imagine. For the image implies that events somehow already exist in the future, reach the present at a determined moment, and finally come to rest in the past. But nothing exists in the future; it is empty; one might die at any minute. Therefore such a person has his face turned toward the void, whereas it is the past behind him that is visible, stored in the memory.


This is why when the Greeks speak of the future, they say, "What do we still have behind us?"

Arendt's insight is that we must, inevitably, act in the present, whether we want to or not. What Benjamin says is that we are being propelled into the future by past events, even as we look backwards, focusing always on what has already happened.

As I understand Mulisch's contribution to this discussion, he wants us to be cognizant that the future is blank. It is a void.

That brings me back to Hannah Arendt. We need always to resist the temptation to consider that our role is to report, observe, and describe. Our role is to act, and our actions will create the world of the future. This is the world we will be able to appreciate (or dread) only in retrospect. We will decide, by our actions, what kind of world will blow us away.