#309 / Voting: Necessary But Not Sufficient 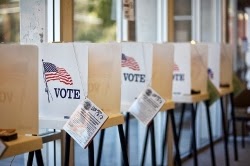 The print edition of the San Jose Mercury News had a big headline on a front page article in the Sunday, November 2, 2014 issue: "How do we get voters to polls?" The CEO of the Matrix Group thinks "Election Day Needs a Marketing Plan."

The emphasis here is on the act of voting itself, with the idea being that getting people to "vote" is somehow the key thing in making our democracy work, and that it is by "voting" that we will be able to "secure the blessings of liberty to ourselves and our posterity," as the Preamble to the Constitution puts it.

This idea that "voting" equals democracy is very generally accepted throughout society, and while I am all for voting, I want to suggest that getting people to "vote" might well be the least of our concerns, as we contemplate the future of democratic self-government in the United States.

The Victory Lab is a book that documents how politics today is metamorphosizing into an effort to manipulate people to "vote" in the way that the politicians who are doing the manipulation want them to vote. Alternatively, there are clearly now systematic efforts to refine methods of voter suppression, to prevent the voters (or at least certain voters) from voting, when that will achieve the end result, which is to provide the "blessings of power" to those who are the most successful manipulators.

"Voting," in other words, now appears to mean more to those organized interest groups (including political parties) attempting to use the political process to achieve and maintain power than to the voters themselves. A hint that this is true is found in the way that the Mercury News constructed its headline. Who is this "we" that wants to "get voters to the polls." Seems like the "we" is not the voters, but those manipulating them.

In fact, the plummeting rates of voting participation suggest that the public, generally, is aware that someone is trying to manipulate them, and that a voter's decision to withhold his or her "vote" isn't necessarily the result of apathy, or ignorance, or a failure to care about good citizenship. Purely and simply, the "voters" don't want someone using them for purposes which are not their own.

If I am right about this, then the focus of discussions about voting and democracy ought to be on the "democracy" part, not on the "voting" part. Before I am going to vote, many voters may be concluding, I need to know that "my" vote can really achieve something for "me," as opposed to helping to transfer power to some other group, or class, or interest. Voting is about power, and the reason that voters are not voting, I suggest, is that they no longer find a direct connection between their vote and a resulting transfer of power to them. They vote, but the result is not that things are changed in the way they wanted. That kind of direct relationship between voting and results is what "democracy" is supposed to be all about. Democracy is supposed to provide a mechanism to secure power for ordinary people.

If that's the idea, then "voting" is the last step in the process. If there isn't any process by which ordinary people are organizing to take power over issues of concern to them, then voting doesn't make sense. It's like getting on stage for the graduation ceremony when you haven't actually taken the course.

Voting is great, true! It's necessary, but not sufficient. Long before the time to vote, people need to have organized so that the people and propositions on which they are voting are ones generated by their own democratic participation.

"Democracy" needs more than a "marketing plan;" it demands that we invest our lives and time in organized efforts to deploy our collective power to get what we want. If there isn't the democratic work beforehand, "voting" is not really of great value to the person who has the right to vote. In today's society, as we are losing faith in our power to take power, "voting" is just like any other ad-driven consumer choice. Macy's or Walmart? Apple or Microsoft? They're different, but when I watch the ad, and then cast my "consumer vote," the benefits of that "vote," the power it conveys (which in this case in my money), goes to some third party, not to me.

If "democracy" is just another consumer activity, and we get to choose our brand by voting, then voting does need a "marketing plan," but it doesn't have much to do with the system of democratic self-government established by the rest of the Constitution, the part that follows that Preamble. The intention of our system of democracy is to give ordinary people power over their collective destiny. It's an opportunity we can take, if we are willing to do the work to take it, but it is not a consumer good that can be delivered to us by someone else.

Voting is great, true, but what we need now is not more "voting." We need more of what comes before that.