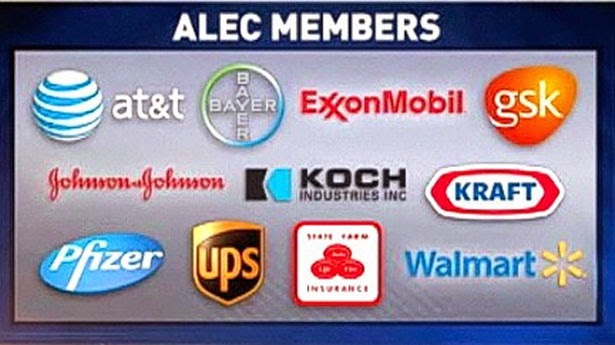 The American Legislative Exchange Council, or ALEC, is an organization that lobbies for corporate America. It also attempts to disseminate right-wing policies throughout the individual states. As one example, ALEC has been a big proponent of state "stand your ground" laws (the laws that legitimize killing people whom you believe threaten you). ALEC has also been outspoken in denying the need for action on global warming. The Center For Media and Democracy has an "ALEC Exposed" webpage. Check that out if you'd like to get a taste of what ALEC is all about.

The corporations shown above are not the only ones that have been supporting ALEC. High tech firms based in the Silicon Valley have been doing their part: Google, Yahoo, and Facebook, for example. On Thursday, September 25, 2014, Michelle Quinn, a columnist for the San Jose Mercury News, reported that Google has decided to withdraw support for ALEC. Yahoo has taken similar action. Eric Schmidt, Google Executive Chairman, accused ALEC of "literally lying" about climate change. Facebook has indicated that it's probably not going to renew its commitment to ALEC in 2015.

I disagree with the positions and policies advocated by ALEC, so I am happy to learn of these corporate defections from its ranks. However, I want to register an observation about a phenomenon I have witnessed over the last year or so, using ALEC as an example.

As an active participant in the social media (Facebook most particularly), I have noticed lots of appeals to sign "petitions" directed to the CEOs of big corporations, urging them to have their corporations take various actions that would be beneficial. I received lots of requests urging me to sign petitions to corporate leaders asking them to withdraw corporate support from ALEC, but that's just one example. I and others have received many requests to sign petitions directed to corporate leaders, urging various actions on many different significant issues.

It is absolutely great, of course, to speak out on issues you care about, and to try to persuade others to take actions that you think are right. No problem there. My observation, though, is that we are more and more conceding that this country is actually run by the corporations, not by the people, and so we "lobby" the corporations instead of our elected officials.