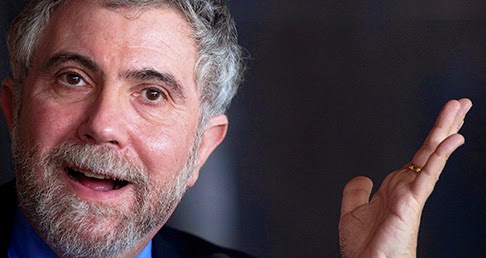 Paul Krugman (pictured) is one of my favorite economists. In a recent commentary in The New York Times, titled "Errors and Emissions," Krugman delivered the following message: successfully cutting back global warming emissions will NOT mean the end to economic growth. In fact, a successful strategy to transition to a non-hydrocarbon economy could actually stimulate growth.

Well, that is happy news (particularly if you think that economic growth is a precondition to a good life)!

It takes energy to get energy, but historically fossil fuels delivered an immense profit on the meager investments of energy required to drill or mine for them. The EROEI figures for renewables are generally lower than current ones for fossil fuels. And energy returns for fossil fuels are declining as companies are forced to dig deeper and deploy more sophisticated (read: expensive) technology to get at lower-grade resources. The overall EROEI of society is falling, and the transition to renewables will not halt that process (though it will lead to an eventual leveling-off). If you think long and hard about what declining EROEI actually means for our civilization, it’s difficult to imagine an outcome that could be characterized as economic growth—at least, growth as we’ve known it for the past century.

So, whether Krugman is right about economic growth, or not, isn't really the question that should concern us. What should concern us is whether or not we are willing to run as fast as we can from combusting the hydrocarbon fuels that are creating our climate crisis.

Both Krugman and the Post Carbon Institute agree on that.