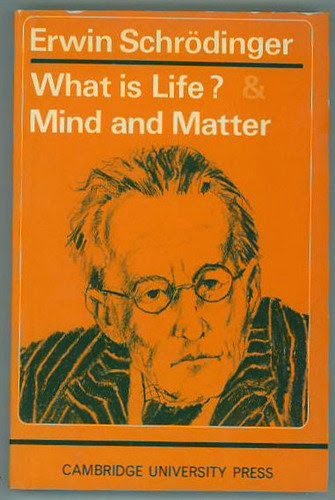 Erwin Schrödinger must surely be one of the most famous of physicists. If you haven't heard of Schrödinger, I am somewhat surprised. Perhaps you have heard of Schrödinger's cat, a very famous feline in his (or her) own right. Getting the specifics on the cat is what makes that cat famous. As a matter of fact, it's even hard to know whether the cat is dead or alive, and while that seems to be a pretty basic question, Schrödinger said it could go either way, and he wasn't actually sure.


At any rate, my brief comment here, stimulated by a column in the September 6-7, 2014 edition of The Wall Street Journal, is not really about Schrödinger's cat. In fact, my comment is only incidentally about Schrödinger. He got into my comment by way of having written an essay called Mind and Matter. That happens to be the title of that Wall Street Journal column I read.

The author of the column was Robert M. Sapolsky, who is a professor of biology, neuroscience, and neurosurgery at Stanford University. His column is headed Mind & Matter. I am betting that Sapolsky chose that title as an implicit homage to Schrödinger. Even though Schrödinger was a physicist, he wrote about genetics, and that is what Sapolsky is writing about, too.

Sapolsky's column in the September 6th-7th edition of The Wall Street Journal is titled "Sperm Can Carry Dad's Stress As Well as Genes." If I am following him correctly, Sapolsky is asserting that "behaviors" can be transmitted to the next generation, so that you not only inherit based on the DNA you receive from your parents; you inherit based on the behavior patterns your parents pursue.

In my Two Worlds model, that seems to say that "our" world, which we create by our own actions (you could call them "behaviors") can modify the World of Nature, at least to the extent that future generations may be "changed" from what genetics might otherwise dictate, based on "the environment." As Sapolsky puts it: "The environment can alter biology with multigenerational influences."

For good or ill, that seems to elevate the importance of what we do in the human world for which we are directly responsible.

Maybe the outrageous willingness of human beings to perpetrate violence on others is not the result of a "biological determinism" that can never be escaped.

That could provide a bit of hope.