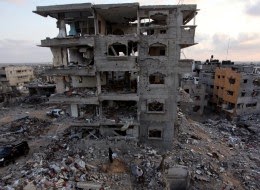 CBS News reported on August 23rd that "Israel bombed an apartment tower in downtown Gaza City on Saturday, collapsing the 12-story building in an unprecedented strike." Pictured above is another building in Gaza, also destroyed by Israeli attacks.

Destruction like that pictured above is ever more frequent, particularly (but not exclusively) in the Middle East, and the loss of life caused by current conflicts in the Middle East is horrific. Current estimates are that over 170,000 people have died in Syria in the last three years, nearly a third of them civilians. UNICEF reports that the lives of millions of children have been devastated.

Ultimately, we live in the World of Nature, a world we did not create, and upon which we must ultimately depend for our survival. Most immediately, though, we live in a world that we construct ourselves. It is a world, in very large part, of buildings. At least theoretically, we can replace buildings when conflicts have destroyed them. Destroying the world that we have built is thus perhaps incrementally more "acceptable" than destroying the World of Nature upon which all life depends.

We should remember, however, that our "built environment" supports the world in which we most immediately live. As sealife needs the "substrate" of the coral reefs to survive, so do we, in the civilization we have constructed, depend upon the structures we have built within our cities and towns.

Scenes like that pictured above are becoming ever more frequent, and such destruction poses a danger to our survival. Just as we are "pushing the limits" of the World of Nature, we are pushing the limits of what our civilization can survive, as we destroy our world, the world we have physically constructed with such great efforts and at such great expense.