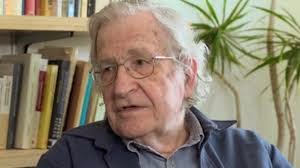 A recent discussion between Noam Chomsky (pictured) and Chris Hedges is very much worth reading. It's long, but it is worth getting to the end.

In the middle of the discussion comes this somewhat surprising comment by Chomsky. America is an anti-capitalist society. Makes sense when you think about it. True. But who would have thought?

In a capitalist system, the basic principle is that, say, if you invest in something and, say, it's a risky investment, so you put money into it for a long time, maybe decades, and finally after a long time something comes out that's marketable for a profit, it's supposed to go back to you. That's not the way it works here. Take, say, computers, internet, lasers, microelectronics, containers, GPS, in fact the whole IT revolution. There was taxpayer investment in that for decades, literally decades, doing all the hard, creative, risky work. Does the taxpayer get any of the profit? None, because that's not the way our system works. It's radically anti-capitalist, just as it's radically anti-democratic, opposed to markets, in favor of concentrating wealth and power.