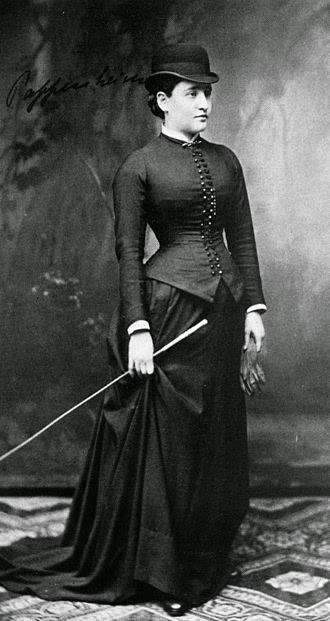 The woman pictured to the left became famous under the alias Anna O, the pseudonym given to her by Josef Breuer, who published her case study in a book that Breuer wrote in collaboration with Sigmund Freud, Studies on Hysteria.

Anna O's real name was Bertha Pappenheim (1859–1936), an Austrian-Jewish feminist and the founder of the Jüdischer Frauenbund (League of Jewish Women). The technique pioneered by Breuer and Freud, based on their experience with Pappenheim, became known as "the talking cure."

In the Wikipedia article discussing the technique, which she credits for helping her to recover from bulimia, Diane Keaton says this: "All those disjointed words and half-sentences, all those complaining, awkward phrases...made the difference. It was the talking cure; the talking cure that gave me a way out of addiction; the damn talking cure."

Most Americans will recognize the face to the right. Theodore Roosevelt served as the 26th President of the United States. His life has recently been assessed in a book called The Bully Pulpit, by Doris Kearns Goodwin, which I wrote about in yesterday's posting.

In fact, The Bully Pulpit was more than an examination of the relationship between Theodore Roosevelt and William Howard Taft, Roosevelt's hand-picked successor as President. As a review published in The New York Times puts it:

The Bully Pulpit is built around two relationships — one between Roosevelt and Taft, lifelong friends and reformist comrades, until the partnership ruptured; the other between power and the press.

Goodwin's book is deeply interested in how political rhetoric, as employed by Roosevelt, was able to "shape public sentiment and mobilize action." The book examines not only Roosevelt's own writings and speeches, but his use of the press, particularly the "muckraker" press, to advance his political reform efforts.

There is no doubt that great political leaders are often great speakers, and adept in mobilizing the power of the press to advance their political goals. In lots of ways, The Bully Pulpit documents Roosevelt's genius in this regard, and to the degree that Taft comes off as inferior to Roosevelt, it is because of his lesser abilities in using that "Bully Pulpit" to sway public opinion.

Let me, though, suggest another way of thinking about "political speech." Political speech is not just great "speeches," whether from a Roosevelt or a contemporary genius of such political rhetoric, President Barack Obama. All of us, if we "talk" about politics with each other, are political speakers. We are probably not "great" speakers, either as orators or writers, but our rather disjointed, almost inarticulate efforts, "those complaining, awkward phrases," to use Keaton's characterization, have great political power. What I am suggesting is that the "political speech" that counts most for self-government is our own speech, speech that may be far from elevated, a discourse among ourselves about the political topics that demand our attention.

A main premise of "democracy," anchored in our country in the First Amendment to the Constitution, is the idea that we can "talk ourselves" into self-government. In a very real sense, the "method" of self-government is nothing more than that kind of talking.

For the political ills that assail us (ones not unlike those this nation faced in the Progressive era), it is wonderful to have the inspiration of great orators, but they are not, I think, what will be most decisive.

We could do a lot worse than adopting the "talking cure."