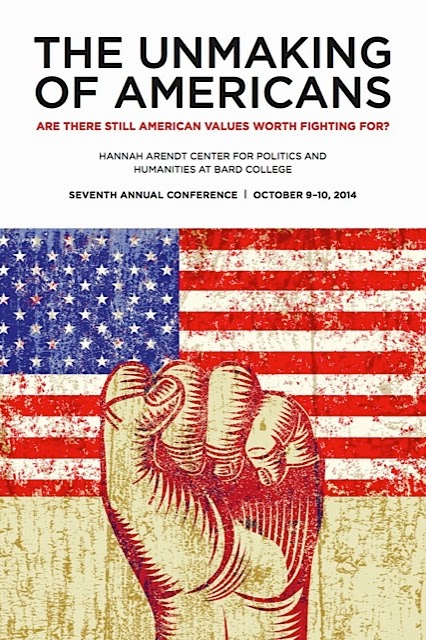 The Hannah Arendt Center at Bard College is hosting a conference this coming October, and is posing the question: "Are there still American values worth fighting for?" Click on the image for more information.

It seems to me that the question posed is a timely one. The online advertisement for the conference offers this perspective:

Today, the country that for 200 years saw itself confidently as the "New World"—the Novus Ordo Saeculorum—is shedding its missionary zeal. In opinion surveys, younger Americans are significantly less likely to be “extremely proud to be American” or to believe that American possesses a special virtue as a force for good in the world. Upward income mobility, the heart of the American dream, is more rare in the United States than in most of Europe. And the American tradition of local self-government—what Hannah Arendt saw as the true innovation of American freedom—has been superseded by the rise of centralized power in the service of national security. It is hard to deny the truth that America is, today, increasingly less exceptional than in the past.

I particularly liked the reference to what Hannah Arendt says about local self-government. My sentiments, exactly!