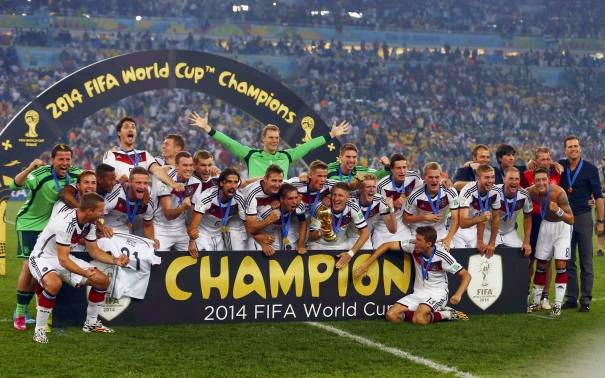 David Brooks, who writes for The New York Times, opines that "soccer is more like life than baseball." Or maybe not exactly.

I am quoting the headline on Brooks' recent commentary, as that commentary appeared in the print edition of my hometown newspaper on Sunday, July 13th. We have to attribute the headline to the Sentinel, and not blame it on Brooks.

Brooks' actual sentiments, as expressed in his column, are that "life is more like soccer than baseball." That statement is somewhat related to what the Sentinel's headline said, but it's actually a different thought.

At any rate, I think that Brooks' column is well worth reading, as he touts the teamwork that helped propel Germany's soccer team into the final playoff in the 2014 World Cup, which the team capped with a win against Argentina yesterday. The column focuses much of its discussion on "controlling space," but the fundamental contrast Brooks outlines is the contrast between soccer and baseball, baseball being "individualistic," and soccer being a sport where cooperation and teamwork are more important.

To quote Brooks' directly, he says that "baseball is a team sport, but it is basically an accumulation of individual activities." "Soccer," says Brooks, "is not like that. In soccer, almost no task, except the penalty kick and a few others is intrinsically individual."

I do think that "life" demands teamwork. And I most emphatically think that we go wrong when we overemphasize the "me" as opposed to the "we."

But in all fairness to America's "national sport" (and that's baseball, not soccer), we do need both individual action and collective cooperation, if we hope to be "winners."

As we create our human world (and that's what "life" is really all about), it's not baseball versus soccer. It's not "me" versus "we." We need them both.

That said, I think that Brooks' column is a much-needed antidote to the overwhelming "me" orientation of American politics. We have a lot to learn from soccer!

It's nice to have had the World Cup competition to give us a few lessons.