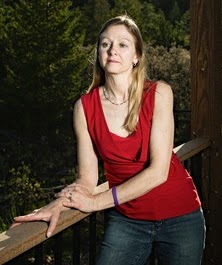 I recently became aware of a controversy surrounding the use of "power morcellators" in connection with operations to remove fibroid tumors, and to carry out hysterectomies.

My introduction to the controversy came by way of an article that appeared in the May 22, 2014 edition of The Wall Street Journal. Debra Grymkoski (pictured) told her story to The Journal, and said she believes that her objection to power morcellation, and her refusal to allow it to be used in connection with a minimally invasive hysterectomy performed on her, probably saved her life.

In essence, a "power morcellator" is used in procedures like minimally invasive hysterectomies to "chop up," or "morcellate," tissues to be removed. That chopped up tissue is taken from the body through a small laparoscopic port. The "morcellation" procedure means that incisions made for access to and removal of tissue from the body can be minimized. That, of course, has many advantages.

The "disadvantage" comes from the possibility that some of the tissue "morcellated" might be cancerous, in which case the procedure might actually distribute cancerous cells throughout the peritoneal cavity. In Grymkoski's case, a postoperative biopsy did show the presence of invasive, cancerous cells in the tissues removed from her body. Had morcellation been employed, Grymkoski thinks it is likely that that this cancer might have spread everywhere, internally.

Just before I read the article about power morcellation, I had read an Associated Press article, also appearing on May 22nd, that described twin bombings in Nigeria believed to have been carried out by the group Boko Haram. The proliferation of bombings, kidnappings, and terror attacks in Africa, and in fact throughout the world, might well reflect a phenomenon in which the very efforts intended to respond to and stop the infection of terrorism end up spreading it further. The metaphorical relation to "power morcellation" struck me. An operation intended to "clean up" a problem, and to "chop up" and remove offensive tissue, can end up making things even worse.

President Obama, in his May 28th speech to the 2014 West Point graduating class, speaks specifically to this concern:

Our actions should meet a simple test: we must not create more enemies than we take off the battlefield.

Recent attention to information about the dangers of "power morcellation" is of course critically important in terms of medical practice. Frankly, however, reflecting on the "morcellation metaphor," in terms of our foreign policy, might be even more important.

In Africa, Iraq, or Afghanistan, trying to "cut out" terrorists cells appears to be spreading the contagion.

If the doctors can reevaluate, so can we. We had better start looking for a different approach.