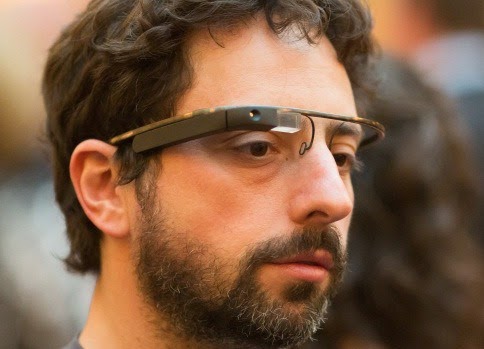 The picture above is from an article posted on the ZDNet website. ZDNet tries to keep us all advised of the latest trends in high technology. The picture shows Sergey Brin, one of the co-founders of Google. The title of the article is "Thanks for Nothing, Jerkface."

Violet Blue, author of the "Jerkface" article, writes for Pulp Tech, which is part of the ZDNet empire. She also publishes a blog called Open Source Sex.

As another ZDNet commentator notes, Violet is "very angry" with Brin (and Google). Delving into the controversy, it appears to be related to what Violet calls the "Nymwars," somewhat described in the following excerpt from one of her postings from 2011:

2011 is the year Google made its major social network play with the launch of Google Plus – and became the year that imprinted Nymwars onto the map of wider collective consciousness.

Not long after Google launched Plus, it staked its citizens ability to participate in the social network and ancillary Google services on whether or not Google thought its users were operating in Plus under their “real names.”

It pitched many ordinary netizens into longstanding battles surrounding identity and anonymity online – and brought issues of privacy and safety to the fore of mainstream media discussions.

Shortly after welcoming everyone to its new social network, Google Plus quietly embarked on a sudden, mass account purge. The shutoff of Google+ user accounts spanned from well-known tech figures to generally anyone that didn’t conform to its ill-defined policy.

It was the first strike in Google Plus’ enforcement of its “real names” identity rules. Accounts with pseudonyms, nicknames, mononyms, names that included scripts from multiple languages, names that “looked fake” and stage names were all suspended in a mass purge.

At launch the G+ policy stated, "To help fight spam and prevent fake profiles, use the name your friends, family or co-workers usually call you."

Google+ did not warn users before suspending user accounts. Some people reported being locked out of all Google services, including docs and Gmail.

Controversies and raging debates about online anonymity and pseudonyms are certainly part of the online landscape. But Google Plus’ mishandling of social networking in regard to user names pushed pseudonym arguments out of online community spheres, and into mainstream consciousness.

The Google Plus “real names” issue is so deeply troubling, divisive and unendingly problematic that 2011 effectively became Nymwars Year Zero.

I just stumbled upon the "Nymwars" controversy (and I presume "Nymwars" really translates as "Name Wars").

I now understand better the "TruYou" concept, as discussed by Dave Eggers in The Circle. Google and similar companies can't maximize their advertising-based revenue stream unless it knows who we are - and ALL about us. Disclosing our "TruYou" is only the start.

If you haven't yet read it, check out The Circle. I am ever clearer that this is an important book, and one that can help us all to understand the future of Privacy, Technology, and Freedom in our contemporary, digital world.