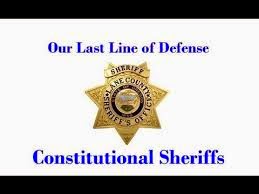 The "Constitutional Sheriff" movement is based on the idea that local sheriffs are the nation's last line of defense against a runaway federal government that is ignoring the U.S. Constitution, and that is seeking to impose tyrannical controls over the citizenry. Apparently, most of the sheriffs involved have decided that they, rather than the courts, should be the ones who decide what is and what is not constitutional.

I am, I do confess, more than a bit nervous about overreaching efforts by the federal government to create what Noam Chomsky calls a "surveillance state," putting the rights of ordinary citizens at risk. There is a real problem there, and it would be good for local law enforcement officials to be sensitive to the issues involved. That said, the "Constitutional Sheriff" movement doesn't quite capture the best way to address that potential problem.

At least, not in my judgment.