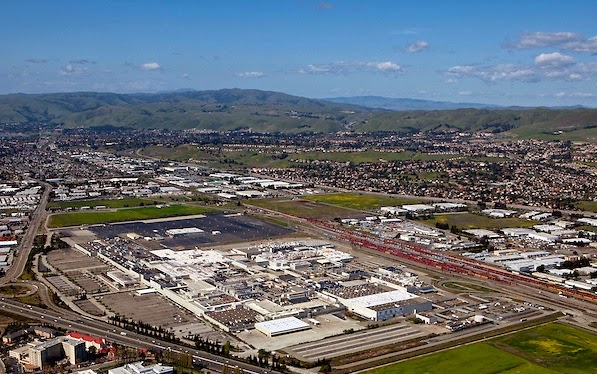 Carl Pope, former Executive Director of the Sierra Club, writes a blog called "Taking The Initiative." In his latest posting, Pope waxes rhapsodic about an automobile factory located in Fremont, California. Bay Area residents will be familiar with the huge structure (shown above) that borders the Nimitz Freeway. The building was first a GM Plant, then a NUMI Plant (New United Motor Industries, a joint venture of GM and Toyota), and then a Toyota Plant. Toyota closed the Plant in April 2010, but it has now been reopened as a Tesla Plant.

Making it personal, Pope titles his posting "The Factory That Forged Me," though he reveals that he first set foot inside the building on May 23rd of this year. Pope was there to attend a meeting of the World Energy Innovation Forum, and much of his report on the meeting is filled with commendations for Elon Musk, the Tesla CEO. The comment that caught my attention, however, was attributed to commercial builder Mogens Smed who founded the company DIRTT in 2005. The acronym, by the way, stands for "Doing It Right This Time." Here is what Smed says about cars:

A car, [Smed] points out, is used 2% of the time if privately owned and used. If deployed in a shared fleet – think Zipcar or even Uber – it gets 60% utilization. So the steel, rubber, glass and aluminum we need to drive the same cars around can drop by 97% just from organizing the way we own them differently.

If Smed is right (and I think the math works), we could make huge improvements in transportation energy efficiency by "sharing," and by looking at automobiles from a community or collective perspective, instead of from an individualistic one.

If you think global warming might really be a problem after all, despite what the folks l quoted yesterday say, this is rather good news!