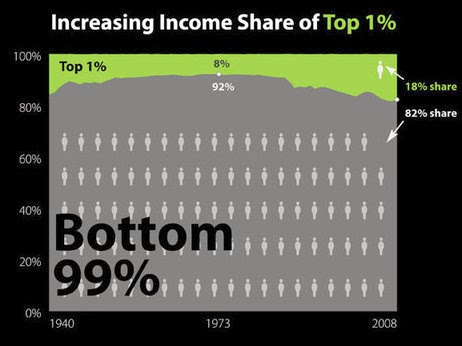 The "Snark Street Journal" (known as The Wall Street Journal to its admirers, who are perhaps relatively small in number, but who are rich in resources) just can't resist taking shots at President Obama. Kimberley A. Strassel's "Potomac Watch" column on Friday, March 28th, provides a prime example of The Journal's snarky tone.

The headline on Strassel's column says that "Obama's Inequality Pitch Falls Flat." Her point? President Obama's stated concern about income inequality (click the link, and see the illustration above) is obviously a political tactic to drum up political support for the Democratic Party, as the nation heads into elections later this year, and that tactic doesn't seem to be working. The Democrats aren't making much progress politically. Snark, snark, snark.

Meantime, back in the world in which factual realities are of more importance than political tactics, a review in The New Yorker comments on a recent book by economist Thomas Piketty. Piketty teaches at the Paris School of Economics, and has spent nearly twenty years studying economic inequality. His book, called Capital in the Twenty-first Century," has been called a "watershed ... in economic thinking" by Branko Milanovic, a former senior economist at the World Bank. The Economist says that the book "could change the way we think about the past two centuries of economic history."

What is the main conclusion of Piketty's book?

In terms of income generated by work, the level of inequality in the United States is "probably higher than in any other society at any time in the past, anywhere in the world."


The consequences of this extreme inequality? According to Piketty, they are "potentially terrifying."

Could it be that our President's concern about economic inequality is not actually motivated by political tactics, but is his effort to focus the nation on a major danger to our continued economic prosperity and social stability?

Not according to the Snark Street Journal.

But I think that this is exactly what is going on. The President is doing his job!

No snarks about it.