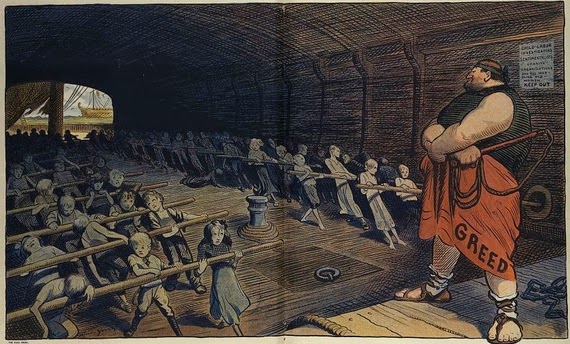 The Atlantic has run a nice essay on greed and our economic system. It's worth reading. It covers the ground from St. Thomas Aquinas to Ivan Boesky:

St. Thomas Aquinas, who ranked greed among the seven deadly sins, warned that trade which aimed at no other purpose than expanding one’s wealth was “justly reprehensible” for “it serves the desire for profit which knows no limit.”

“I think greed is healthy,” an apparent acolyte told the graduating class at Berkeley’s business school in 1986. “You can be greedy and still feel good about yourself.” The speaker was Ivan Boesky, who shortly thereafter would be fined $100 million, and later go to prison, for insider trading. His address was adapted by Oliver Stone as the basis for Gordon Gekko’s “greed is good” speech in Wall Street.

The "Greed Is Good" mantra (and the title of The Atlantic article, by the way is exactly that phrase) comes from a misapprehension of who we really are. We know that we are individuals, but we forget, all too easily, that we are also part of a greater whole. When motivations are analyzed and defended, a good argument can be made for greed if the unit of analysis is the individual alone. When we see ourselves as being "all in this thing together" (life, I mean), then greed loses its allure.