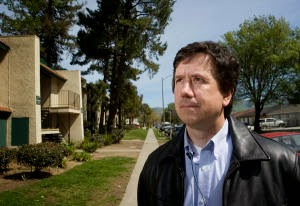 David Pandori (pictured) ran for Mayor of San Jose in 2006. He was then a member of the San Jose City Council, and he was not completely beloved around City Hall, at least according to one of the news stories I was able to hunt down.

Pandori didn't win the Mayor's race in 2006, but he did write a book, during the course of the campaign, called A Better San Jose. You can download a copy of Pandori's book by clicking the link and then going to the bottom of the story.

According to Scott Herhold, a columnist who writes for the San Jose Mercury News, putting out the book was almost "revolutionary." Herhold clearly applauds the recommendations that Pandori included in the book, calling A Better San Jose "the best template so far for governing our city."

What Herhold likes best about Pandori's book is that it started with "the notion of the city as an extended family."

There is something to that. We are not just a bunch of isolated individuals.

We're in this together.