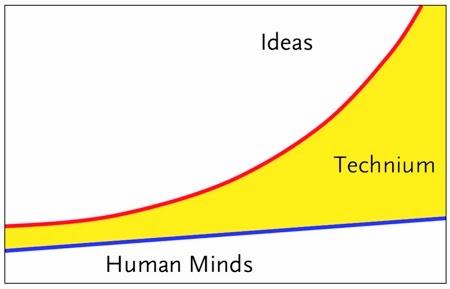 We learn from Wikipedia that "Technium" is the "brand name of an incubation scheme in Wales." Based on what I see on Google Images, "Technium" also brands both bicycles and fishing reels. However, my researches have not been prompted by an interest in either fishing or biking, nor by an interest in economic development opportunities in the British Isles.

I was introduced to the word "Technium" by a recently published "Conversation With Kevin Kelly." Kelly played a key role in starting Wired magazine, and has written a book called What Technology Wants. That's where the word "Technium" comes from, at least as far as I am concerned. Kelley even has a website devoted to the concept, and he defines "The Technium" as follows: "the greater, global, massively interconnected system of technology vibrating around us."

I think that the "Conversation" is worth reading (or watching). I am not so sure, however, that it's helpful to "personalize" the products of human activity, and to attribute to them an independent existence. But, of course, that is exactly what Kelly is doing when he writes about "What Technology Wants."

What I want, or what you want, or what we want seems more pertinent to me than what "Technology" wants, in its hypothetically independent existence.

From my perspective, we still live in only Two Worlds, the World of Nature, and the Human World that we create.

Technology, as far as I am concerned, is more like bicycles and fishing reels (both human creations) than it is an independently-existing creative force, akin to either God or ourselves.

In other words, I think that we are the "boss" of technology, not the other way around. We better not forget that, either!