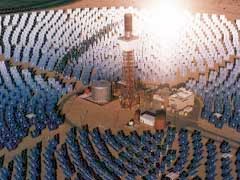 The February 13, 2014 edition of The Wall Street Journal reports that the giant Ivanpah solar power plant (opening on that day) is "the first of its kind, and may be among the last."

What's the problem? Could it be that authorities have reevaluated whether devoting five square miles of fragile desert habitat to an industrial facility is environmentally supportable? No, while environmentalists protested the Ivanpah approval because of its impact on sensitive habitat, and because it threatened the survival of the endangered desert tortoise, that isn't what is bothering the authorities now.

Could it be that building a facility that relies on water to make steam, to drive electric generators, isn't best placed in a location where there is hardly any water to be found? Nope! That doesn't seem to be the concern either.

Maybe it might be that remotely located solar generating facilities automatically discard the advantages that solar power might enjoy, if the generating facilities were distributed so as to be close to the location of energy use? That has been an argument that environmentalists have made. That argument, however, doesn't seem to be on the radar in the "late to the party" reevaluation of Ivanpah that The Journal is reporting.

What could it be, then? What's not to like?

How about the fact that the new plant, which features towers as tall as a forty-story building, literally burns up birds in the air, as they fly in the vicinity? That's it! That's the problem. The Wall Street Journal headline calls Ivanpah a "$2.2 Billion Bird-Scorching Project."

Late to the party, indeed!

Building a $2.2 billion dollar powerplant to boil water with mirrors made money for the companies who built the plant and who financed the construction. The fact that such plants burn birds out of the sky is only one of oh so many reasons not to do this again.

Can't we just learn to "get along" with Nature, instead of trying to dominate it with man-made machinery?